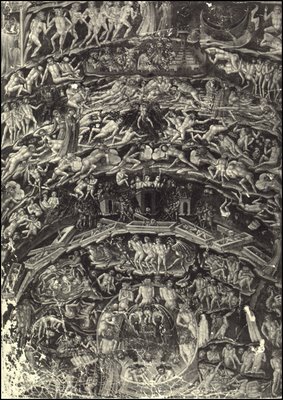 When the Holy Father took possession of the Lateran Basilica, he said that it was not for the Pope to teach anything of his own but to pass on the Tradition of the Church. There has been a lot of tosh in the secular press about the Pope "changing" the teaching of the Church, or even abandoning a teaching, well that is not in the Pope's competence to do this. He is servant, not master of the Church, as Pope Benedict has continually pointed out. So it will be interesting to see his reaction to the work of the International Theological Commission who will report to him on "Limbo" today.
It therefor seems a bit cheap to suggest as Ruth Gledhill did in the Times that the Pope might be influenced to follow a Muslim line that all children go to Heaven, she should know one thing about Pope Benedict: he does not follow fashion.
The "Penny" Catechism, published by the CTS until recently taught that unbaptised children went to Limbo, so too the American Baltimore Catechism. The Pope's beloved Augustine taught that they went to Hell, where they endured punishment which was slightly less than everyone else's there. Peter Abelard seems to have "invented" Limbo, coming from the word for "edge" as in edge of Hell, a place of natural happiness, but out of sight of the Beatific Vision.
I don't think any Council has taught about Limbo, and has certainly not excommunicated those who do not believe in it, then I cannot think of anyone who has disputed it until recently. In the Orthodox Church the unbaptised either go to heaven or hell, depending on where or when, or to whom one addresses the question. Some might suggest that they go to the part of Hell that Christ emptied of the prophets and patriarchs at his "Descent into Hell" and because this event happened outside of time they are immediately redeemed, following them into Heaven.
I think the most the Pope can do is to say God is infinitely merciful, it is not His nature to create anything in order to condemn it or to destroy it, rather he intends that all creation should be saved. As far as the unbaptised are concerned, we must trust in his infinite mercy and love. The problem that we have in the West comes from Dante's image of heaven and hell that is graduated, all those circles, Scripture does not give us that, we are either in one or the other. Both Pope John-Paul II and the then Cardinal Ratzinger have suggested Limbo is simply theological speculation.
What he would not want to do is the encourage the delay or neglect of infant baptism.
There is a good article on BBC website
at October 06, 2006

I think the key doctrine here is Augustine's, in which he said that God has bound us by the sacraments, but is not Himself bound by them. He is fully capable of saving, and bringing to the Beatific Vision, by a sovereign act anyone to whom the sacraments are, through no fault of their own, unavailable.

The BBC website has a comment by Father Brian Harrison (who I met in Lincoln, Nebraska two years ago) who told the BBC News website that while limbo may have been a "hypothesis", the clear "doctrine of the Catholic Church for two millennia has been that wherever the souls of such infants do go, they definitely don't go to heaven."

Thet begs the question - especially pertinent in view of the vast numbers of infants who die by spontaneous or induced abortion - of whether there are, in fact, any "such" infants whom God allows to die without the grace that takes away original sin.

The doctrine of limbus infantum might be better formulated hypothetically: if anyone were to die in originated original sin only, then they would be excluded from the Beatific Vision, yet not be punished in retribution, for there is no personal sin for which they could be damned.

But originated original sin, in an infant soul to whom prevenient grace is applied, establishes no obstacle to its sanctification, in which case why would God not lead it to the supernatural destiny He has appointed for it?

Now that I've mentioned Father Harrison, I remember putting to him for comment a point from the floor at the Christ the King Symposium, in regard to the Catholic Church's teaching on freedom of conscience (he has articles on the subject at http://www.rtforum.org/lt/index.html).

The Council document Dignitatis Humanae taught that everyone has the right not to be coerced by civil authority into disobeying a command or prohibition of conscience.

The point was that it is impossible for anyone who was not an ethical monotheist, whether pagan, secularist or atheist, to have a conscience other than a purely permissive one, which would in that case not fall within the terms of Dignitatis Humanae.

Father Harrison indicated disagreement, but did not have the time or the occasion later on to elaborate. Any takers?

The whole point, Michael, is what happens to those who die before the age of reason, that persumably relates to the formation of anything that could be called a conscience in the sense that we would normally use it nowadays.

I would hope that the ITC are actually looking that as well as "Limbo". I think Limbo is a useful tool to begin asking a lot of very important questions, for example the importance of baptism and evangelisation, the value or otherwise of visible union with the Church. Etc.

a) The International Theological Commission has no magisterial status so it doesnâ€™t matter what it says. (Its creation along with the new style Pontifical Biblical Commission was accordingly a bad idea).

c) Cajetan thought that the children of Catholic parents who died before baptism might be cleansed of original sin by a vicarious baptism of desire.

d) Aborted children might receive baptism of blood by analogy with the Holy Innocents if the anti-Christian aims of the legislators and activists who sought the legalisation of this crime constitute a strong enough parallel to Herodâ€™s command to massacre the innocents of Bethlehem.

f) To go beyond this and say that all infants dying before baptism are cleansed of original sin (at the moment of death?) is to abandon the doctrine of original sin to intents and purposes.