Complaing to the BBC (part 2) 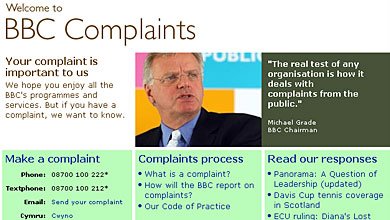 Just in case you miss this in the comments box I thought I 'd repeat it here, it is from one of our parishioners who works in TV. She reminded me that the BBC News actually carried a trailer for this programme as if it was News.

It is very important that people write to the BBC and complain if they are dissatisfied with the Panorama programme or in fact with any of the other programmes on the BBC. The BBC (and all the terrestrial broadcasters) take complaints and comments very seriously particularly as it is generally believed that each comment received from the public represents the opinions of 100,000 other people. Each comment will be dealt with individually and possibly followed up by OFCOM. Personally, my major grievance with the Panorama programme is not the editorial content of the actual programme but the exploitative tactics used by the BBC to promote the programme. I think it's unconscionable that any broadcaster is permitted to promote a programme in mainstream news bulletins under the banner of 'genuine' news. Unlike the accepted editorial bias of the newspapers, I believe it is imperative that news coverage on television remains neutral and objective. For what it’s worth, I don’t believe that the BBC is anti-Catholic, I think it is just another pitiful example of the lengths that a public funded broadcaster will go to, to produce sensationalist programmes in a bid to win the ratings war. The only good news I can give you is that the new episode of Cracker on ITV1 on Sunday night got 8.1 million viewers and Panorama only got 2.5 million.
http://www.bbc.co.uk/complaints/
at October 03, 2006

I forgot about the trailer on the news too, so I have complained about that.
Maybe you ought to put the complaint button on the sidebar permanetly.

The true test of whether the BBC is anti-Catholic is to see how long it is before they pass off as true the Awful Disclosures of Maria Monk - who was of course, related to Rasputin the Mad.

I have complained, twice once about Panorama, and once about the News, have you Michael? if you have, that represents 400,000 on this page alone sofar, according to Clare's reckoning.

"I am writing to complain about the Panorama broadcast on 1 October, entitled "Sex Crimes and the Vatican".

The programme was misleading because it dealt with internal Church documents linked to Pope Benedict XVI in an official capacity he held before we was elected.

These documents are not about the concealment of sexual offences against minors. They are directives on how to deal with cases in which a priest is accused of having solicited a sexually immoral act while bound by the seal of confession.

Such solicitation is punishable under canon law. So is the violation of the seal of confession. On pain of automatic excommunication, which only the Pope may absolve, a priest may not, for any reason whatsoever, disclose what he has heard in confession, even under threat of his life. Not even the Pope can compel or authorise him to do so. History has no record of violation of the seal by any Catholic priest, even those who left the priesthood or were dismissed from it in disgrace. Indeed, St John Nepomucene was put to death by King Wenceslas IV of Bohemia for refusing to divulge what his Queen had confessed.

Because the sacramental seal binds him to perpetual silence, a priest is vulnerable because he cannot defend himself against a false accusation of solicitation in the confessional. Canon law has a special rule to punish this, and it is only right under these circumstances that his accuser be sworn to secrecy."

I too have complained and I hope that others will.

I told them as well

I too copmplained, following the prompting from Fr Ray's BLOG. Joe