A New Understanding of Communion???? 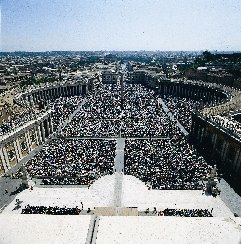 Fr Sean has an interesting post on the implications of the extension of the Classical Roman Rite, which he found in the Scotsman. Bishop Fellay, the leader of the presently schismatic Society of Saint Pius X, has been talking about an accommodation with the Church similar to what exist in China with the "Patriotic Church", this I find interesting because this could well be a model for reunion with the Orthodox.
He says, "We would be a bit like the Chinese Patriotic Church, in the Church without really being there," he explained. "There could be a relationship between Rome and us, but it would not yet be a juridical relationship."
At the moment the "Patriotic Church" seems to exist in partial communion, its lay members and its priests seem to move freely between this government sponsored Church and the partially tolerated Catholic Church. The Bishops of the Patriotic Church, when named by the state seek approval from Rome, before ordination. Under Pope John Paul II Rome almost always accepted their nomination, under Benedict this has happened less often and those Bishop's ordained without Rome's permission incur automatic excommunication and have not been accepted by the vast majority of the people or the clergy. Cardinal Zen has recently spoken about significant, "85% reconciliation of the Patriotic Church", with the Church.
The problem with the SSPX is that there are more issues than simply the celebration of the ancient Mass, there is the whole matter of the authority of the Second Vatican Council, religious freedom and so forth. SSPX is in schism, though in so many areas at one with the Catholic Church. Except for a lunatic fringe, it earnestly seeks full and visible communion with the successor of Peter. There has been lots of talk in Rome about re-establishing communion and then sorting out these other matters afterwards.
The Orthodox Church is in similar position, though possibly less earnest about full communion. The Great Schism, in the 11th Century, in many ways did little to alter the relationship between the laity and the lower clergy until the nineteenth century and the declaration on infallibility. In many places Catholic priests acted as confessors to Orthodox nuns, lay people received the sacraments from either Catholic or Orthodox priests, the major effect was that on substantial matters of disagreement Rome was no longer the last recourse, though in theory the canons of the Greek Church still have the Pope as the ultimate source of judgement.
There is something radical about the theology of Pope Benedict, he is totally at one with the Traditional of the the Church and like the good scribe is able to bring out from his treasury things both old and new. It seems to me that he is seeking a new understanding of the very nature of communion.
We live in theologically exciting times. It would be glorious if solution to the Patriotic Church, the Lefebrvists and the re-union with the Orthodox could actually be the sorted out substantially this November, remember this November not only do we expect a declaration on the Tridentine Rite but also the visit the Constantinople. Everything I read by our pope, makes me think that he has the subtlety of mind to set in train such a reconcilliation.
at October 16, 2006