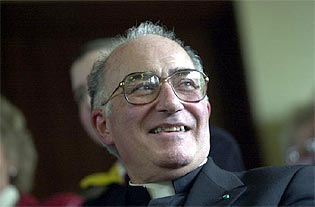 Conti - investigated
I am worried about civil liberties being eroded, so foregive my returning to this matter again, there does seem to be a cynical manipulation of public opinion through intimidation by the government, the police, the law. I think it should worry us all. Yes it is part of Blair Britain, to fair I suspect it will also be part of Cammeron Britain too.

By Hilary White
LONDON, October 18, 2006 (LifeSiteNews.com) –“Hello Sailor,” “The Sissy Duckling” and “Daddy's New Roommate” are among the book titles on a recommended government reading list for primary school children to teach them about homosexuality. New government regulations to place them in classrooms have been held back after officials were “inundated” by parent’s objections. Such books have not appeared in our school, nor have I heard of them appearing in other schools, even in Brighton.
The British government’s “anti-discrimination” regulations were to come into effect this month but the UK’s Telegraph reports that Cabinet ministers are “at odds” over the proposals which some warn will lead to reverse discrimination against Christian and other religious groups who hold homosexual acts to be sinful.
Colin Hart, director of The Christian Institute, a group that tracks the growing incidents of anti-Christian legislation and prosecutions, said: "The thought that new regulations could make these books compulsory is outrageous."
The Christian Institute warns that the regulations will make it unlawful for teachers to refuse to use the material in class. A media release from the Institute said, “Most parents would be alarmed to see the gay rights books already recommended by the Government for primary schools.”
Cases in the UK against Christians and others who object to the homosexual political advance, are alarming some rights groups. Colin Hart said his organization is particularly concerned about “the impact of these planned laws on religious liberty and on the school curriculum.”
“We do not want to see school lessons become the focus of litigation by crusading gay rights groups.”
Examples of this kind of anti-Christian harassment abound already in the United Kingdom.
In November 2003, the Anglican Bishop of Chester was investigated by the Cheshire police after he told his local newspaper of research showing that some homosexuals re-orientated to heterosexuality.
In December 2005, family-values campaigner, Lynette Burrows, was investigated by police after she expressed the view on a radio programme that homosexual men may not be suitable for raising children.
In January 2006, Patrick Harvie a Member of the Scottish Parliament for the Green party, asked Strathclyde Police to investigate with the intention to prosecute, the Roman Catholic Archbishop of Glasgow, Mario Conti, for defending marriage in a sermon at a church service.
The Director of Communications for the Archdiocese of Glasgow, Ronnie Convery, said that the action was a “publicity stunt” and was “not worthy of serious consideration”.
“It does however show once more that there are none so intolerant as the so-called champions of tolerance,” Convery said.
Read about many more “Christianophobic” incidents in the UK:http://www.christian.org.uk/rel_liberties/index.htm
at October 18, 2006