Another Spaniard in St Peter's 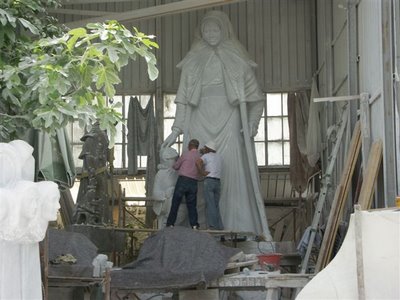 Alessando Romano, the Roman sculptor, working on a new sculpture of Saint Genoveffa Torres Morales, who died in 1956, which the Holy Father blessed this morning. The last new sculpture in St Peter's was of another Spaniard, Saint Jose Maria Escriva, the founder of Opus Dei.
She founded a new religious congregation caring for those who were neglected by everyone else. She herself had lived in an orphange from the age of thirteen when she was cripple by a tumour on her led, she is shown with a crutch
at October 04, 2006