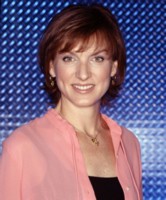 Fiona Bruce wasn't wearing her usual crucifix for 10 o'clock news last night. Insiders report staff on screen have been told not to wear anything that points to a political or religious leaning.
"It was argued that BBC staff on screen should not wear anything which hints or directly points to a political or religious leaning and that the cross contravened this and should not be allowed."
Now is this the first step to banning someone called Singh, because his/her name would point directly to their religious "leaning"? Or let us be more scary, maybe someone not just with a Jewish name but who looks Jewish.
I can understand Jack Straw's problem with covered faces, but a head scarf, a crucifix, a skull cap, a turban, a tattoo in the case of Coptic Christians, where is religious freedom?
Don't the dreadful BBC realise "people of faith", that is what we are known as these days, are licence fee payers.
I suppose if we don't bother to complain, what can we expect.
Have you done it yet?
at October 06, 2006