Complain to the BBC (part 1) 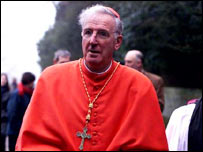 Cardinal Cormac Murphy-O'Connor has expressed his "enormous distress and alarm of the Catholic Community" over the BBC Panorama 'Sex crimes and the Vatican' programme. The text of his letter to Mark Thompson, Director General of the BBC follows below.

Dear Mr Thompson,
In May 2005 I wrote to congratulate the BBC on its coverage of the death and funeral of Pope John Paul II and the election of Pope Benedict XVI.
It is with deep disappointment that I now write to express the enormous distress and alarm of the Catholic community at your decision to broadcast Sex crimes and the Vatican. No-one can deny the devastating effects of child abuse in our society and the damage inflicted on the victims and their families. This is particularly shameful if such abuse is committed by a priest and it is of course legitimate to portray heart-rending elements of this evil.
However, your programme sets out to inflict grave damage on Pope Benedict, the leader of a billion Catholics throughout the world. It is quite clear to me that the main focus of the programme is to seek to connect Pope Benedict with cover-up of child abuse in the Catholic Church. This is malicious and untrue and based on a false presentation of church documents.
I cannot understand why no-one from your Corporation made any attempt to contact the Catholic Church in this country for assistance in seeking accurate information about this matter. I must ask if within the BBC there is a persistent bias against the Catholic Church. There will be many, not only Catholics, who will wonder if the BBC is any longer willing to be truly objective in some of its presentations. What a pity if the respect in which the BBC is held worldwide were to be seriously undermined by the bias and lack of integrity shown in the decision to broadcast a programme such as this.
Yours sincerely
Cardinal Cormac Murphy-O'Connor
President of the Bishops Conference of England and Wales
Archbishop of Westminster
Why not complain yourself to the BBC at
http://www.bbc.co.uk/complaints/
at October 03, 2006

It is very important that people write to the BBC and complain if they are dissatisfied with the Panorama programme or in fact with any of the other programmes on the BBC. The BBC (and all the terrestrial broadcasters) take complaints and comments very seriously particularly as it is generally believed that each comment received from the public represents the opinions of 100,000 other people. Each comment will be dealt with individually and possibly followed up by OFCOM.

Personally, my major grievance with the Panorama programme is not the editorial content of the actual programme but the exploitative tactics used by the BBC to promote the programme. I think it's unconscionable that any broadcaster is permitted to promote a programme in mainstream news bulletins under the banner of 'genuine' news. Unlike the accepted editorial bias of the newspapers, I believe it is imperative that news coverage on television remains neutral and objective.

For what it’s worth, I don’t believe that the BBC is anti-Catholic, I think it is just another pitiful example of the lengths that a public funded broadcaster will go to, to produce sensationalist programmes in a bid to win the ratings war. The only good news I can give you is that the new episode of Cracker on ITV1 on Sunday night got 8.1 million viewers and Panorama only got 2.5 million.