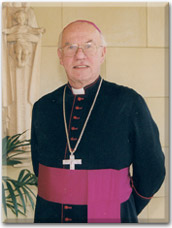 THE leaders of the Catholic Church in Scotland have descended into an extraordinary public spat over claims by a "rogue bishop" that they do not speak out enough against homosexuality.
In an unprecedented move, the Church's two most senior clerics, Cardinal Keith O'Brien and Archbishop Mario Conti, have moved publicly to rebuff a third bishop, Joseph Devine of Motherwell, after he claimed the Church was embarking on "a policy of appeasement".

Devine wrote in a letter last week that he condemned the actions of a senior Church aide who, he claimed, had failed to express opposition to plans to allow gay couples to adopt.
The new laws mean that homosexual men and women who have entered a civil partnership can now adopt as a couple. Previously, they were only allowed to adopt on their own.
read the rest of the story
at October 29, 2006

The gossip was that O'Brien had to take an additional oath of loyalty and orthodoxy before he was made a Cardinal, by the then Prefect of CDF.
Which one is the "rogue"?

I believe that it's a matter of public record that Cardinal O'Brien was asked to declare his oath of loyalty publicly, rather than the normal practice of taking it in private. It was also widely rumoured at the time of the appointment that a mistake had been made and the wrong archbishop was appointed! Seemingly (then) Cardinal Ratzinger had not been privy to the various goings-on in the curia and apparently he insisted on the oath being declared publicly. Much of this may have been to do with the radio shows in which one or two of the Cardinal's priests take part, during which Catholic moral teaching is openely opposed or ridiculed by the priests as well as the participants.

Whatever the facts of the matter, the cardinal has noticeably been seen to be taking a more orthodox approach to matters since his elevation. Archbishop Conti was always seen to be fairly orthodox and not a natural ally of Cardinal O'Brien. Bishop Murray was an Edinburgh priest, so no doubt a Cardinal's man.

However, the bishops will not want to rock the boat where the Scottich parliament is concerned and it seems as if Bishop Devine may have upset them in this. Bishop Devine is himself an orthodox bishop, with no axe to grind to career path to maintain. I'd be inclined to lend him support.

What would be interesting is if the thoughts of the new bishop of Paisley (Philip Tartaglia) emerge. He is seen by some to be the saviour of Catholicism in Scotland.
There could be interesting developments. Could something similar happen south of the border?