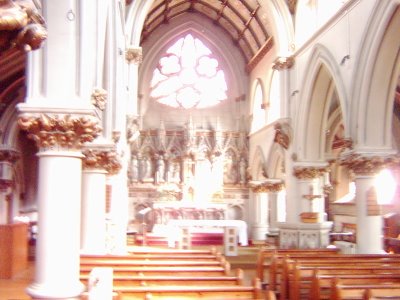 About three months ago our Bishop, Kieran Conry, came up to me and said he had been reading a book that spoke about the need for oasis’s and sanctuaries for people in cities, and that he wanted us to open our Church, as it is the most central in Brighton.

I was please, I felt the Church should be opened ever since I got here. I believe doing things under obedience is a good idea, it means that it is someone elses decision and therefore more likely to be God's will.We had tried having people there watching for a couple of hours each day, it hadn’t really worked, it just meant that there was someone there for beggars to intimidate to get money out of. In the past when it had been left open things were stolen, needles were found, at one time someone had even put dog faeces in the ciborium and there had been thefts as well.

What has happened since? Nothing, except for a collection box being wrenched of the wall and a few minor thefts. The burglar alarm is sometimes set off by people wandering onto the sanctuary (we must put some of those old security rails Catholic churches used to have).

A change has come over the Church, it feels warmer, it is not unusual to find, especially in the late afternoon early evening two or three people sitting and praying. I crept in one evening and found a group of five or six Korean women singing a hymn together in front of the Lady Altar, when people aren’t there praying then there is the glow of candles which say that someone a few minutes ago has been praying there.

I remember staying at a Methodist college in Bristol and being taken by one of the staff there to the then new Clifton Cathedral, he was a bit sniffy about it and asked, “Where are the nooks and crannies where a man may hide and weep before his Lord”, strange words from a Methodist, but quite important for us.

Well our Church offers nooks and crannies to the people of Brighton. Being open I hope it says somehow we “trust you”, “we are willing to risk this building because we think that prayer is that important”, "the Catholic Church thinks you are important enough to open the for you".
at October 03, 2006

Email ThisBlogThis!Share to TwitterShare to FacebookShare to Pinterest
Labels: parish

Fr Ray is right that the whole church feels warmer. A new parishioner commented on it on Sunday and said how delighted and surprised he was to find the church open. Another said "how nice to be trusted".

South Ashford is not considered the most celubrious area of town, and people are surprised to hear I leave the Church open. I've been here over 5 years and, so far, leaving the Church open has not resulted in any major problems. Children who have no knowledge of the Christian faith sometimes wander in and I get to have a chat with them, and people thinking of moving in to Ashford also drop by. Sometimes I see unlit votive candles, a clear sign that someone has been in and wants their candles lit. Yes, keep our Churches open if at all possible.