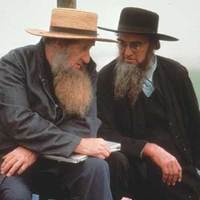 I get annoyed with Catholics and others who come out with the rather meaningless platitude, "Well, we all worship the same God". My answer: Don't be daft of course we we don't! The Great Athanasius, said, "You can tell an Arian by the way he treats the poor". Our beliefs affect the way we live in society.

"By their fruits you shall know them".

I was struck by this piece by Dwight Longenecker.

Contrast the Amish and Islamist. Both appear to be religious fanatics. Both societies are intentionally anti-modern. Both societies are culturally antique. The men with their beards, the women with their dark modest dress, the suspicion of the outside world, the suspicion of technology...they look pretty similar. And suddenly in Amish land just as in Islam land both societies are faced with wanton violence and unimaginable bloodshed. In both crazed gunmen execute innocent little girls.The violence and insane killing does not surprise me. Murder is as ancient as Cain and Abel.It is the different response that makes me gasp with sudden enlightenment. The different response among people in Lancaster County and people in Baghdad reveals the core difference between Islam and Christianity. In one culture they wail and beat their breasts and then plot how to murder their enemy. In the other they wail and beat their breasts, then load up their buggies to go and forgive their enemy. At the heart of the Christian faith is forgiveness: the need for forgiveness, the way of forgiveness, and the power of forgiveness which is the cross of Christ. Is forgiveness a part of Islam? Have you ever heard any Muslim--radical, moderate or nominal--ever mention forgiveness at all? Even once? Have you ever got the idea that they even have it in their vocabulary? I haven't.I am no expert in Islam, but I do know that the cross of Christ is not at the center of Islam, and the demand to forgive and be forgiven (if it exists at all) is marginal. Instead the Muslim follows the only other form of 'justice' that humanity can conceive: retribution and revenge. In the face of violence, the downward spiral of retribution and revenge can only plunge everyone into more violence, bloodshed and grief.Christianity stands that on its head. The Christian faith demands forgiveness--radical, crazy, totally total unconditional forgiveness.
at October 08, 2006

Dwight Longenecker asks whether forgiveness is a part of Islam. I suppose it is after a fashion, though in Islam God is capricious in regard to it. You can be truly contrite one day and God will forgive you, identically contrite the next and He won't.

Even when He does forgive, the Muslim cannot be sure that he will get to heaven, and even if he does he might have to spend some time in hell first.

The only sure way of going to Paradise, and going there immediately at death, is to die in jihad. This is what makes Islam so lethal to eternal salvation - if you blow yourself up among infidels as though this were a more effective substitute for being sorry for your sins, then there is only one state of soul in which you can die, even if you are otherwise invincibly ignorant of the truth of Christianity.

We heard some time ago on the news the story of the Reverend Julie Nicholson, an Anglican lady vicar who resigned from ministry because she could not bring herself to forgive the suicide bomber who killed her daughter on 7 July last year.

For Julie Nicholson to forgive Mohammad Sidique Khan, and for the Amish to forgive Charles Carl Roberts for murdering their children, seems to me to be academic, given that both killers died and went for final judgement before Christ, to whose just sentence no-one can add, and whose final pardon cannot be impugned.

Seventy-five mourners attended Roberts' funeral, half of whom were Amish. However, although their attendance manifested a heartfelt forgiveness toward his family, the appropriate Christian gesture is love.

Forgiveness is an act of mercy toward one who has wronged the one who offers it, and Robert's family were not guilty of his crime.

But when manifesting it toward Muslims we have to be careful. Patrick Sookhdeo writes that Muslims usually see humility and forgiveness as signs of despicable weakness, and that to offer profuse apologies to them for faults, past and present, real or imagined, is at best useless and more likely to be counter-productive.

I suppose this is why Christian military victories over Islam have often been ascribed to the intercession of her who is the model of Christian humility, and whose feast of Our Lady of the Rosary we celebrated on Saturday, the 435th anniversary of the Battle of Lepanto.

I had a telephone conversation with a friend of mine that day, who encouraged me to agitate against the Tablighi Jamaat mega-mosque being planned for the neighbourhood of the Olympic Stadium in London, as though to tell the athletes of the world who's boss in the UK.

I'd already had this on my mind for some time, and I'd love to get a prayer campaign going against this project, and if possible to arrange for the Missionary Image of Our Lady of Guadalupe to be brought over from the US for the occasion.

I hope you don't mind I put something on my blog about this which I wrote a few weeks ago but hadn't edited fully as I wanted to have it checked first...

I was being provocative, "Well, we all worship the same God". My answer: Don't be daft of course we we don't!"
But ultimately the truth of the matter is that we actually worship our own image of God. Hence the importance of the first commandment, not making an image of God.
Revelation and reason lead us to a true image of God, without that we can end up by worship calves of our own construction, which have more connection to us than to the reality which is God.

religion of pieces,
You referred me to a BNP website, I have removed your comment.
I think it important to discuss the role of Islam within society, because Islam is important and worthy of discussion.
The BNP is something which I hold in utter contempt, its doctrines are in direct opposition to the Catholic faith, it members are contemptible bullyboys. It is this organisation and its adherents I fear more than any member of the Islamic community. It is vile and corrosive, please do not bring them onto this site again.

Father, you're absolutely right about the BNP. A while ago I had some letters published in the Catholic Herald warning readers - against some opposition that refused to be convinced - that the BNP is a pagan party. Its opposition to Islam is both a surrogate for its racism, and predicated not on the fact that Islam is untrue, but that it is un-British - and their definition of Britishness excludes everyone without ancestors in this country dating back to the last Ice Age.

Furthermore, there are various articles for sale on their website which are in the shape of the Odal rune - the unit emblem of the Prinz Eugen Division of the Waffen SS.

Finally, their leader Nick Griffin, I am given to understand, frequents the conferences of the National Democratic Party, Germany's home for demons and a haunt for every evil spirit and every unclean and detestable bird.