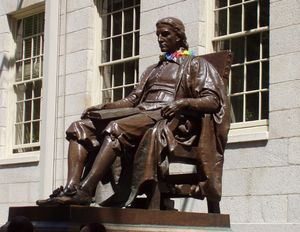 Fr. John Zuhlsdorf on his splendid site has this interesting piece, if you go there read: iii nonas octobres
There is an interesting CNN article you could glance at:
BOSTON, Massachusetts (AP)—Harvard University, founded 370 years ago to train Puritan ministers, should again require all undergraduates to study religion, along with U.S. history and ethics, a faculty committee is recommending.The surprisingly bold recommendations come after years of rancorous internal debate over what courses should be required of all Harvard students. The current core curriculum has been criticized for focusing on narrow academic questions rather than real-world issues students would likely confront beyond the wrought-iron gates of Harvard Square.The report calls for Harvard to require students to take a course in "reason and faith," which could include classes on topics such as religion and democracy, Charles Darwin or a current course called "Why Americans Love God and Europeans Don’t.""Harvard is no longer an institution with a religious mission, but religion is a fact that Harvard’s graduates will confront in their lives," the report says, noting 94 percent of incoming students report discussing religion and 71 percent attend services."As academics in a university we don’t have to confront religion if we’re not religious, but in the world, they will have to," Alison Simmons, a philosophy professor who co-chaired the committee, said in a telephone interview Wednesday....I think this is very interesting in light of what Pope Benedict XVI was arguing for during his amazing Regensburg Address. He argued for reintegration of theology in the university, which grew as an institution from Christian Europe.
at October 06, 2006