St Mark's - A Liturgy Without Hymns 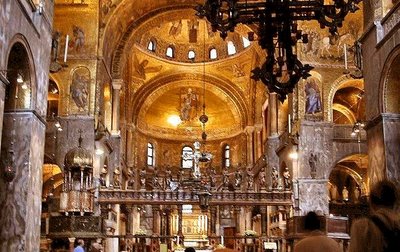 Adoremus Bulletin, which liturgy nerds love, has an interest article by Joseph Swain, St Mark's -- A Liturgy Without Hymns. It follows on from some of last weeks posts
Music?
&
A Catholic Head of Music on Catholic Music

In Venice they have cantors and polyphonic choir, but Sacre Coeur, Paris used to celebrate very elegant litugies with merely a couple of cantors singing French psalmody at the entrance, between the readings, at the offertory and communion, the congregation joined in with the Ordinary (the Gloria, Kyrie, Sanctus & Agnus Dei) and the Alleluia. Some of the most beautiful liturgies here have been funerals with just the Ordinary, Alleluia and a Marian Anthem, often without organ.
I wish I had the courage to ban all hymns, except the sequences which are specifically named in the lectionary.
at October 17, 2006

The Gloria is a hymn. THE hymn, surely? How many more hymns do we need?

We shouldn't be afraid of repetition in the liturgy, whether it is words or musical forms.

Often good liturgy is about not including things, apart from what the Missal says.
Certainly adding words upon words seems to be gilding the lily.

There should be more time for silences in the Mass - so often it's filled up with hymns (i.e. after Communion) just for the sake of it. Why are some clergy and liturgists so afraid of silence in the Mass?

I do think there is a concensus rising out there that we can "back off" on the hymns. There is no mention of a sung recessional in any of the prevailing documents. And it doesn't make much sense to announce "go in peace" and then tell everyone to stay put for verses 1 and 3 of "Joyful, Joyful." As a church musician, I feel increasingly silly doing that. So we're (with the pastor's agreement) phasing out the sung recessionals and replacing them with instrumentals.

I think I'll go after the offertory next. But slowly and carefully. Like it or not, there are a lot of folks out there who are very fond of their hymns.

"Why are some clergy and liturgists so afraid of silence in the Mass?"

Maybe because the absence of singing or activity is not silence.

That being said I noticed last Sunday I was surpirsed how many people at Mass just don't join in any singing nowadays. In fact community singing isn't part of modern western culture anymore, except maybe at a football match.
Thoughts anyone?

By all means ban the hymns. but then the rest has to be of a rather better standard than it is at present. The music is meant to inspire,surely?

Is it meant to inspire or lead to prayer? I don't think music can do both, easily.
Is the liturgy for our entertainment, or to enable us to come closer to God.
One of the problems with so many modern composers is that they try to write inspiring music, and fail abysmally.
If you look at the traditional music of the Church: chant, the music was there to serve the words and to help bring out their meaning, thus bringing the one who prays more deeply into pray.

It seems to me that at St Mary Magdalens people are singing the entrance hymn and the Missa de Angelis, and keeping quiet for the rest. So the hymmns would not be missed if they are dropped.

In many congregations the Missa de Angelis and other chants tend to be a fight between organists and congregations. Organists often play too loud and too slow, so we end up with a dirge You need a group of singers who will keep up the speed. If priests sing alternate verses solo, they are in a position of responsibility and need to take care to sing the correct notes and maintain the tempo.

I wasn't thinking of any particular priest when I made that comment ;)