Sex Crimes and the Vatican 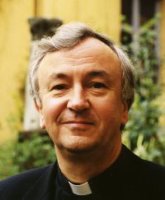 "The BBC Panorama programme, 'Sex Crimes and the Vatican', makes clear the suffering of those abused in their childhood. But as a public service broadcaster, the BBC should be ashamed of the standard of the journalism used to create this unwarranted attack on Pope Benedict XVI.
"Viewers will recognise only too well the sensational tactics and misleading editing of the programme, which uses old footage and undated interviews. They will know that aspects of the programme amount to a deeply prejudiced attack on a revered world religious leader. It will further undermine public confidence in 'Panorama'.
"There are two strands to the Panorama programme 'Sex Crimes and the Vatican'. The first is a graphic and explicit account of the evil of child abuse and the personal damage it causes to its victims. This is horrific and deeply distressing.
"Those abused as children have been grievously offended. This is especially so when the abuser is a priest. The film is a reminder to everyone of the need to work ceaselessly in the protection of children and in response to the needs of victims. The Catholic Church in England and Wales is doing so, with transparency and care, and, in every case, cooperating fully and immediately with public authorities.
"The second strand of the programme is an attack on the Vatican and specifically on Pope Benedict XVI. This aspect of the programme is false and entirely misleading. It is false because it misrepresents two Vatican documents and uses them quite misleadingly in order to connect the horrors of child abuse to the person of the Pope.
"The first document, issued in 1962, is not directly concerned with child abuse at all, but with the misuse of the confessional. This has always been a most serious crime in Church law. The programme confuses the misuse of the confessional and the immoral attempts by a priest to silence his victim.
"The second document, issued in 2001, clarified the law of the Church, ensuring that the Vatican is informed of every case of child abuse and that each case is dealt with properly. This document does not hinder the investigation by civil authorities of allegations of child abuse, nor is it a method of cover-up, as the programme persistently claims. In fact it is a measure of the seriousness with which the Vatican views these offences.
"Since 2001, Cardinal Joseph Ratzinger, then Head of the Congregation for the Doctrine of the Faith, took many steps to apply the law of the Church tallegations and offences of child abuse with absolute thoroughness and scruple."
Archbishop Nichols added: "This statement is endorsed by the Bishops of England and Wales. Cardinal Cormac Murphy-O'Connor, as President of the Bishops' Conference, is writing to the Director General of the BBC, Mark Thompson, to protest about this programme. Cardinal Murphy-O'Connor's letter will be made public later this week."
Fr Tim Finigan offers alink to the texts and a commentary of the document the BBC referred to continually but never quoted.
John Allen in 2003 offered a good analysis of Crimen Sollicitationis. Here is the text of Crimen Sollicitationis in Latin. Here is the text of Crimen Sollicitationis in English.
at October 02, 2006

If you thought Panorama was bad enough, there's more. A documentary film called 'Deliver us from Evil' opens in the states in a couple of weeks. It tells the story of Father Oliver O'Grady, a Californian priest and paedophile. I'm not sure when it's booked for cinema release in the UK but l'm sure it will be much more hard-hitting than the Panorama

The trailer for it can be found on the Apple website

O'Grady was featured in the programme. He has been degraded, he no longer is entitle to the title "Father", I found him disgusting and creepy.
If the film is true then I have no problem with it, what I find objectional is the poor quality of the BBC journalism, which really constituted a gross misrepresentation of the truth. "The Truth" as Pope Benedict says is our chief concern.

Anonymous said...
Why not complain to the BBC?