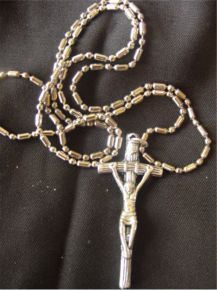 from Fox News - A British Airways employee was suspended from work for refusing to remove a necklace bearing a Christian cross, a British newspaper reported Saturday. Nadia Eweida, a check-in worker at Heathrow Airport, told the Daily Mail she was suing the airline for religious discrimination after being sent home for breaching BA's dress code. "British Airways permits Muslims to wear a headscarf, Sikhs to wear a turban and other faiths religious apparel. Only Christians are forbidden to express their faith," Eweida was quoted as saying. British Airways said company policy said employees must wear jewelry, including religious symbols, under their uniforms. "This rule applies for all jewelry and religious symbols on chains and is not specific to the cross," the airline said in a statement. "Other items such as turbans, hijabs and bangles can be worn as it is not practical for staff to conceal them beneath their uniforms." Liberal Democrat lawmaker Vincent Cable, who represents Eweida's home area of Twickenham in west London, said it was "absolutely mind-boggling that Britain's flag-carrying airline could treat its employees in such a disgraceful and petty manner." "Nadia is a devout Christian who was displaying her faith, but in a modest and totally unprovocative manner," he said. "It is absolutely right that other religious minorities be allowed exemption from the dress code, but why can't a Christian be treated in the same way?" Religious symbols and dress have been a hot topic of debate in Britain since former Foreign Secretary Jack Straw sparked controversy last week by saying he asks veiled Muslim women to uncover their faces when he meets with them.
at October 14, 2006

I've just looked at British Airways' site and it seems that they do not fly direct to Romania, let alone Transylvania.

You wouldn't think so, given their conspicuous aversion to the Cross.

Load of vampires, the lot of 'em!

I hate the cross being worn as jewelry, better to carry it than wear it.
That being said it is unjust that one religious group is descriminated against, but i would hate us to follow France and descriminate against every religious sign.

Ben, Nadia Eweida doesn't wear the cross as jewelery, she is a devout Christian.

I understand she is a Copt. The Copts have a unique tradition of tattooing the cross on their skin, in testimony of the tenacity of their faith: they would sooner lose the skin off their flesh than give up their faith.