Bad music is destroying the Church 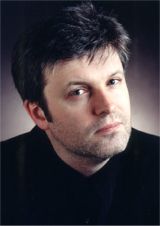 James MacMillan has this interesting article, reprinted in the Catholic Herald it is well worth reading just for its polemical style. I agree with MacMillan's arguement, as one of the few leading Catholic composers we should listen to him carefully.

There is a new momentum building in the Church which could be directed to bringing about this new, creative “reform of the reform”. Part of that momentum comes from a widespread disgust at what was described recently as “aisle-dancing and numbskull jogging for Jesus choruses at Mass”. The days of embarrassing, maudlin and sentimental dirges such as “Bind us together Lord” and “Make me a channel of your peace” may indeed be numbered. Are we seeing the end days for overhead projectors, screaming microphones and fluorescent lighting and their concomitant music, complete with incompetently strummed guitars and cringe-making, smiley, cheesy folk groups? The American writer Thomas Day describes this kind of liturgy as “a diet of romantic marshmallows indigestibly combined with stuff that grabs you by the scruff of the neck and shakes you into submission with its social message”. “What was the rationale of such music?” asked John Ainslie, one-time secretary of the Society of St Gregory, writing in the 1970s. “Many well-intentioned nuns, teachers and later priests thought that such ‘folk music’ would appeal to teenagers and young people generally and so encourage them to participate in the Liturgy instead of walk out from it. “The term ‘folk music’ is, of course, misleading. There is nothing, for example, to link it with the English folk-song tradition... The name was no doubt coined partly because some of the early repertoire was imported from the United States, where it might have been called folk music with some justification, partly because it was felt that the style had something in common with the musical tastes of today’s younger generation and their sub-culture. But it has never been persuasively shown that whatever young people may find attractive to listen to in a disco, they will find attractive to sing in church. “Further, the style is unsuitable for singing by large congregations... more so if the only accompaniment provided is a guitar rather than the organ, since guitars, even amplified, have insufficient ‘bite’ to keep a whole congregation singing together and to give them the support they have come to expect from the organ.” Liturgy as social engineering has probably repulsed more people from the modern Catholic Church than any of the usual list of “social crimes” trotted out by the Church’s critics. Like most ideas shaped by 1960s Marxist sociology, it has proved an utter failure. Its greatest tragedy is the wilful, de-poeticisation of Catholic worship. Our liturgy was hi-jacked by opportunists who used the vacuum created by the Council to push home a radical agenda of de-sacralisation and, ultimately, secularisation. The Church has simply aped the secular West’s obsession with “accessibility”, “inclusiveness”, “democracy” and “anti-elitism”. The effect of this on liturgy has been a triumph of bad taste and banality and an apparent vacating of the sacred spaces of any palpable sense of the presence of God. The jury is still out on any “social gains” achieved by the Church as a result. It may be timely and sobering to reflect on what we have lost. In the early 1970s Victor Turner, the cultural anthropologist, wrote of the old Roman rite: “One advantage of the traditional Latin ritual was that it could be performed by the most diverse groups and individuals, surmounting the divisions of age, sex, ethnicity, culture, economic status, or political affiliation. “The liturgy stands out as a magnificent objective creation if the will to assist both lovingly and well was there. Now one fears that the tendentious manipulation of particular interest-groups is liquidating the ritual bonds which held the entire heterogeneous mystical body together in worship.”In the light of this, the reformed liturgy can be seen as yet another glaring failure by the Leftists in the Church to deliver, even according to their own agenda. It was not meant to be like this. Reading the Sacrosanctum Concilium, the Council’s document on the liturgy, one realises just how much the spirit of true reform has been betrayed by the wilful misdirection of liturgical activists in recent times: “Servers, readers, commentators, and members of the choir also exercise a genuine liturgical function. They ought, therefore, to discharge their offices with the sincere piety and decorum demanded by so exalted a ministry and rightly expected of them by God’s people.” (Sacrosanctum Concilium [SC] Chapter 3, Section 29)“The treasury of sacred music is to be preserved and cultivated with great care. Choirs must be assiduously developed.” (SC, Chapter 6, Section 14)“The faithful are also to be taught that they should try to raise their mind to God through interior participation as they listen to the singing of ministers or choir.” (Musicam Sacram, Part 2, Section 14)
at October 24, 2006

“a diet of romantic marshmallows indigestibly combined with stuff that grabs you by the scruff of the neck and shakes you into submission with its social message”.

Why can't we have some at SMM?

The trouble with the folk masses of old was that they didn't attract the young - they attracted middle age Dads who thought they looked cool with a 12 string guitar. Or was that just my old church?...

If done properly, traditional chant can be enjoyable, fun even, and appeal to young and old alike.

We have just had a festival of traditional sacred music here in Brighton. So there are obviously people around to whom traditional Tibetan chant appeals.

Why do we have to music at all?
Whatever is chosen is going to displease some or even most people. The spoken word is safer.

Hi, I am composing folk and rock songs at the moment. I'm going to start going round the pubs and do open mic and learn them with a drummer and maybe sell some CDs one day. But that is where that music belongs - the pub, a gig, on CD - not in Church!

The Church has a rich heritage of beautiful music which adds a sense of beauty and reverence to the Mass. I'm with Henry on the appeal of traditional chant.

Fashion fads come and go. Quality music will stay.
Alleluja seems odd if not sung and it is odd when we join the angels singing: Holy, holy ... and mumble.
As people move more often and travel the world the advantages of Latin are easy to see.
Even after having been in England for a couple of years most hymns are still inaccessible to me as they are mostly inaudibly sung and therefore hard to join in and even harder to remember. I know many hymns in my own language by heart and I miss them very much as they are part of me.
I generally don’t like listening to very professional choirs singing difficult and long pieces excluding the “ordinary churchgoer”.

I an glad that Maud is a supporter of the Traditional Latin Mass where a substantial part of it is silent.

Well, I did an open mic night tonight. Did not go well! Think I am going to keep my "diet of romantic marshmallows indigestibly combined with stuff that grabs you by the scruff of the neck and shakes you into submission with its social message” to myself from now on!

Laurence, what an incredibly brave thing to do doing an open mic night. Well done you. Don't give up. Just think next time you'll be even better.