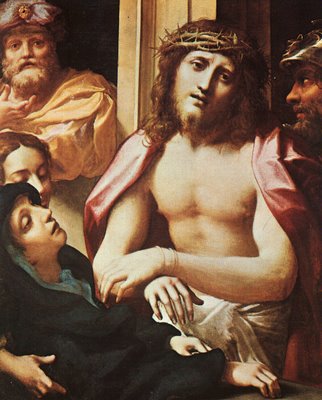 Part of an article on Zenit
... A more detailed look at the situation of the Catholic Church came in another report, published this summer by the Pastoral Research Center. Over a three-decade period Mass attendance has declined by 40%, according to a summary of the report published in the Times newspaper on July 4. The report covered the period 1963-1991. Over the same period baptisms were halved, while marriages and confirmations plunged by 60%. As well, first Communions declined by 40% and the number of adult converts fell 55%. According to the Times, more recent figures, from 2004, show little improvement in the situation. Numbers going to Mass on a Sunday in 1991 in England and Wales stood at 1.3 million, declining to 960,000 in 2004. The Web site for the Catholic Church in England and Wales also publishes statistics that reveal similar trends. The number of diocesan clergy fell from 4,755 in 1981 to 3,765 in 2003. Religious-order clergy fell from 2,266 to 1,363 in the same period. The number of marriages in Catholic churches fell precipitously, from 29,337 in 1981 to 11,013 in 2003. The Web site estimated weekly Mass attendance at 915,497. Last April 10 the Telegraph newspaper published a detailed article on the situation of Catholic monasteries and convents. Citing official figures the article said that only a dozen people entered monasteries in 2004, thus continuing a decline that has persisted in recent decades. Vocations to monastic orders were 107 in 1982. By 1990 this had fallen to 52, and in 2000 only 20 entered. The total number of monks in England and Wales now stands at 1,345, many of them elderly. The situation of nuns is similar. In England and Wales their numbers stand at 1,150, and vocations continue to decline. In 1982, 100 women entered convents; by 2000 this fell to 22. In 2004 there were only seven vocations, with a slight increase to 13 in 2005. An increasing number of monasteries and convents are being sold due to the declining numbers, the Telegraph reported. In Scotland the situation is no better. Cardinal Keith O'Brien, archbishop and metropolitan of St. Andrew's and Edinburgh, has published a plan involving closing many parishes. According to a report June 11 in the newspaper Scotland on Sunday, the number of priests could halve in some areas due to parish amalgamations. The average age of priests in Scotland is now above 60 and the number of active priests in the Edinburgh Archdiocese is expected to fall from the current 63, to just 34 in a decade's time. Scotland now has just over 200,000 practicing Catholics, a decline of 20% compared with a decade ago. The Church of Scotland, commonly referred to as the Kirk, now has a bit over a half-million who attend services, down from 1.3 million in the 1960s.

I put an article on this blog about a report by the Spanish Bishops about doubts and errors, they had the courage to look at their own issues, the analysis they came up with was profoundly Christological. They realised that the central problem lay within the Church itself, because they themselves had failed to ensure that a clear image of Christ was taught by the Church in Spain.
The solution to our problems in the UK lies with our Bishops, and those who are appointed in the future. I am certain it isn't about "managing" certainly not managing decline. What would the great bishops of the past have done? St Charles Borromeo for one, would have ordered days of penance and prayer, turning the whole problem over to Christ. By doing this he would have given a sign of hope, above all that we trust in God, that we are a Christ centred community and that our very purpose is Christ.
What is happening at the moment, is managing for decline, that simply gives the sign that we are are anxious about our own future, thinking our structures have value in themselves, this is an act of gross pride. We have no right to survive as a Church unless at our very centre is Jesus Christ. What purpose is there except Him.
at October 01, 2006

Very well said, Father! Can anyone translate the Spanish Bishops' document for you to post on the blog?

Micheal,
I cannot furnish you with a Spanish translation, but click the link I have now put on the post, the title bar will then lead you to a good account of it by Sandro Magister.

Is the problem that our Bishops are overworked; the apostles gave themselves over to prayer and to preaching, handing over other responsibilities to Stephen and the other deacons.

I am sure that you are right Father Ray and I hope that you are encouraged by the increasing numbers of young people attending Mass at St Mary Magdalen. We all know that it is because you pray for us.

All of them Catholics at the top of their game. Will the Poles save the Church in this country as Polish airman saved Britain in the 1940s, and as King John III Sobieski saved Europe at the gates of Vienna in 1683.

Pole save the Church? No. The culture of the Church in England is so different.

In my experience, decline in Mass attendance has occurred not gradually, but suddenly when there has been a change of incumbent (encumbrance?) who has introduced changes abruptly and insensitively, especially to the liturgy and parish organisation.

The process is reversible - the Oratorians turned a moribund parish into one where it is standing room only if you turn up when Mass starts.

Here in Gothenberg in a so-called secular country the church is packed, and not only with immigrants and is now too small for the congregation. There is a decent liturgy and a structured education programme with things aimed at different age groups.

People are hungry and need to be fed.

I was referring to the Catholic Church, tad!

Michael, I agree again, the Poles could help save the church, but they need to be integrated with the worshipping community and also with the local church community at the social level and be actively discouraged from maintaining their separateness.

This means we as the host community must make adjustments, including to the liturgy. Mass today was in Latin (Mass VIII, Credo III and Pater Noster so everyone could join in most of the singing even if we had to sit through the resdings and sermon with incomprehension.

In England the Church is very different than in Poland, you must sole your own problems, why could we help? Englishmen do not know the Church teaching.

Tad, you're absolutely right that the Church in England is different from in Poland. But the very fact that Poles have come to this country in numbers large enough to increase the Catholic population by 10 per cent may be providential.

Some of these Polish people will return to Poland in time; others will settle here permanently. But they're here and participating in Catholic life, and that by itself renders otiose your question "why could we help?"

Unless I am mistaken most Catholics in this country are anyway of Irish origin, or continental like me.

Yes, the Church here is different from the Church in Poland. There the bishops lead, pray, promote vocations and proudly profess their catholicity and loyalty to the Church and pope.

Here most of them close parishes, discourage the clergy by fawning to a certain section of the laity, transfer Holydays of Obligation to make things easier, attend goodness knows how many meetings, feel the need for a rest (sorry, 'In-service training') in Spain and, oh yes, (rightly) object to the BBC Panorama programme - but out of what motivation? Out of real conviction? because they feel they'd better do something? To curry favour with Rome by being seen to do something they know will be ineffective? Who knows.

Sorry if this sounds bitter - it's not meant to be - I know that there are some good individual bishops, but they seem to be trapped by the collegiality of the Conference. I just feel that here in the UK, we have lacked effective episcopal leadership and witness for so long that it's hard to see any quick fix. The presence of more Poles in this land can only be a good thing, though it might require a bit of give and take on ball sides. The presence of good, sound, effective bishops will undoubtedly lead to improvements.