The Pope on Modern Culture and Christianity 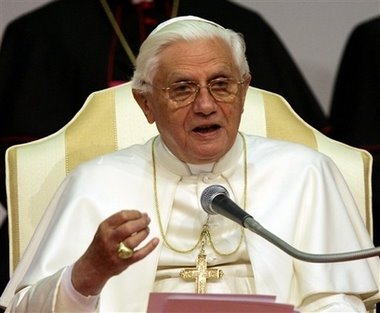 My summary, for what it is worth is based on this excerpt and his other writings: if we live in a world where my idea of good is different from your idea of good we have cannot communicate effectively, this leads to fragmentation and isolation and to ultimate unhappiness. It is only in God that we have access to ultimate Truth, and that we become truly human and therefore truly happy.
Try and summarise it yourself in COMMENTS, award yourselves points for brevity, or give examples.


In a long speech to participants of the fourth national Convention of the Italian Church, which is taking place in Verona, the pope once again tackled the relationship between modern culture and Christianity, and hence between faith and reason, which was at the heart of his speeches throughout his trip to Germany in September. Benedict XVI today repeated that in modern society, “God is excluded from culture and public life, and faith in Him becomes more difficult, not least because we live in a world that presents itself ever more as our work. It is a world in which, so to say, God no longer appears directly; he appears to have become superfluous and extraneous... In the same way, ethics are brought back to within the borders of relativism and utilitarianism, with the exclusion of any moral principle that is valid and binding.” This type of culture is not only a “deep and profound cut” with Christianity, but “more generally with religious and moral traditions of mankind”. It is unable to establish true dialogue with other cultures, in which the religious dimension is strongly present, and it is unable to respond to the fundamental questions on the meaning and direction of our lives. This is why this culture is marked by profound deficiencies and also by a large, uselessly hidden, need for hope.”
This culture also draws attention to the insufficiency of a “rationale closed in on itself” that refuses transcendence and hence any moral principle valid in itself. Of this culture, “the disciples of Christ recognize and willingly take in the authentic values, like scientific knowledge and technological development, human rights, religious freedom and democracy”. However they “do not ignore or underestimate the dangerous fragility of human nature that threatens the journey of man in all historical contexts. In particular, they do not neglect the interior tensions and contradictions of our time.”
“The human being is not, on the other hand, only reason and intelligence. He carries within himself, inscribed in the deepest part of this being, the need of love, of being loved and of loving in his turn. This is why he asks questions and often becomes confused when faced with the hardships of life, with the evil that exists in the world and that seems to be so strong, and at the same time, so senseless.” So the question returns persistently, whether our life can be a safe space for authentic love and in the ultimate analysis, whether the world is really the work of the wisdom of God. Here, much more than any human reasoning, the moving news of biblical revelation comes to our rescue: the Creator of heaven and earth, the only God who is the source of every creature, loves man personally, loves him passionately and wants to be loved by him in turn.”
Affirming this truth “is indispensable to give the Christian witness concrete and feasible content, assessing how it can be implemented and developed in each of the great fields in which human experience is articulated.”
at October 19, 2006

This is not a summary, Father, but a connection to the Bogle on Blair article.
In your summary you speak about the relativity of Truth, if anything that has been the great mark of the Blair era, in everything from the lies which proceeded the entrance into Bush's war with Iraq, with Campbell and Mandleson and the whole spin culture.
In my family we call him the Father of Lies, I see lots of t shirts which say B.Liar, with his picture.
I do not say this to be offensive but merely to point out a common contempt that seems to be currency of ordinary people, especially the young, for him and politics. This results in their disengagement from politics and ultimately from society.
I think in part, this is what the Pope is saying or at least an illustration.

There is also something about the quik fix of same sex relationships, they satisfy the individual (possibly), but as we can see in Brighton they have knock on effects, they sexualise society, they damage the idea of family, they are ultimately sterile. They take away from the biblical notion of the duty to marry and to procreate as part of the essential of being human.

What I noticed has nothing to do with Tony Blair, but with the Holy Father's remark that God has been excluded from public life, reminiscent of Pope Pius XI's encyclical Quas Primas on the Kingship of Christ.

The relativity of truth isn't something that Tony Blair invented - it started in all probability before my grandfather was born.

Blair just has the misfortune to have a name that is an anagram of B.Liar. When I was an eight-year-old in primary school we had a Secretary of State called Margaret Thatcher whose name happened to rhyme with Milk Snatcher. Some of it was mine.

When I was nine months short of voting age she became Britain's only Prime Minister whose name rhymes with Job Snatcher.

Michael, I do not think that Fiona needs to be trivialised or patronised, everyone realises that Relativism goes back to the Enlightenment and beyond.
The point being made was that it has reached a certain highpoint in the Blair administration, at least in this country.
I am sure that one could point to similar high points in France and certainly in Bellasconni's Italy.
The subject isn't Blair, and certainly not Thatcher but Relativism and this Pope's speech.

I think, for you, douze points!

God IS love (That's it! if one goes for the briefest summary --- a bit more if not...)
denial of the objective reality of the 'IS' clouds our vision and limits the experience of true love in every dimension of our lives..without all being referenced to this reality our communication is then limited..we cannot speak the language of love -a deceit distorts our communication and perception of the real.

Love and Truth therefore are inseperable.