Turkish Hi-jacker: what's happened to him? 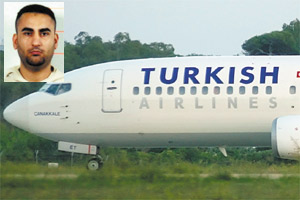 John Allen
When news events such as Pope Benedict's Sept. 12 comments on Islam set off a global earthquake, there are always a few after-shocks. Such was the case this week, with Tuesday's hijacking of a Turkish Airlines plane, en route from Albania to Istanbul, and its forced landing in Brindisi, Italy.
Initially, the hijacking was billed as a protest of Benedict's November trip to Turkey, and that briefly galvanized media interest. When it turned out, however, that hijacker Hakan Ekinci was not a Muslim but a Christian, and that his aim was not to protest the pope but to ask for his help, the story lost its legs.
According to news reports from Turkey, Ekinci, 28, is a convert to Christianity who fled Turkey to avoid compulsory military service. A Turkish blog published a letter he apparently wrote to Benedict last August: "Dear pope, I am a Christian and I do not want to serve in a Muslim army," it said, adding, "Only your sublime leadership will save me."
Ekinci told Italian authorities that he feared for his life after converting to Islam.
To what extent those fears are legitimate, or whether Ekinci is simply playing the religion card in order to avoid his country's draft, remains to be seen. There is no question, however, that a rising tide of Islamist sentiment in supposedly secular Turkey has made life more difficult for its Christian minority.
In February, following the murder of Italian missionary Fr. Andrea Santoro, I spoke with Bishop Luigi Padovese, apostolic administrator in Anatolia, about the situation facing Turkish Christians. He referred to an "anti-Christian climate" in the country manufactured by politicians and the press.
Padovese said that every week the Turkish bishops' conference prepares a bulletin citing "denigrating comments" or "banalities" about Christianity that have appeared in the media.
As one example, a rural Turkish newspaper recently carried an article titled, "A priest sighted." It reported that local children had seen a priest in the vicinity of the town, but chased him off to the great applause of the locals. The article then quoted a local politician: "Priests who arrive in our area want to re-establish the Christian Greek-Orthodox state that was here before. There are spies among these priests, working for the West. They are trying to destroy our peace."
In such a climate, fears such as those expressed by Ekinci may not be entirely unreasonable.
"There were several million Christians in Turkey at the fall of the Ottoman Empire," Padovese said. "How is it possible that in the arc of just 70 or 80 years we've become merely 60,000 or 70,000? The truth is that hundreds of thousands of Christians converted to Islam, taking Islamic names and hiding their identity, out of fear of persecution," he said.

"The Christian presence is still there, I know it's there," Padovese said. "Many of these people know that they are Christians, or come from Christian families, but cannot say so."
The anxieties of Christian minorities in the Islamic world certainly do not justify hijacking airplanes, but they're undeniably part of the overall picture in Muslim/Christian relations. Unfortunately, because that doesn't jibe with the "Muslims mad at pope" storyline of the last few weeks, the Ekinci story was basically dropped.
Let's hope that when the pope actually goes to Turkey, assuming the security situation permits, we all dig a bit deeper.
at October 06, 2006

Email ThisBlogThis!Share to TwitterShare to FacebookShare to Pinterest
Labels: Islam

I think the Holy Father's intention at Regensburg will become clear when he visits Turkey.
I don't want to be flippant but at least he has warned his hearers about what his aprroach is, freedom of religious expression and peace, and presumably the value of Turkey's Islamic roots.