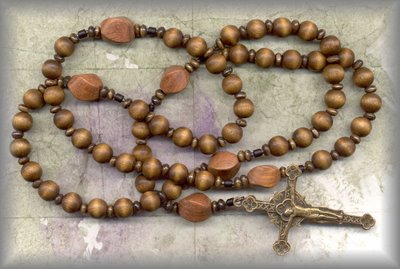 I had a rather disturbed young man come to visit me today; he told me he was possessed. As we spoke, well he spoke, he made himself more and more excited telling me about the voices he was hearing and the fantasies they were causing him to have. I just listened and nodded.

I had thought I shouldn’t let him in but it was raining. About half an hour into our conversation he told me about how he threatening to “cut" a priest who refused to give him money when he had gone to confession. I told him I thought that was a wicked thing to have threatened and I would never give him money in the confessional. Eventually, I couldn’t stop yawning; he was speaking but not really saying anything. The only thing I could think of doing was to get my beads out, he stopped talking and looked at me and seemed about to explode in anger. I thought about what he said about threatening the priest. I suggested we said the Rosary. I’ve started doing that more and more lately, I am no good at making up my own prayers, except, “Have mercy, Lord”. He didn’t know how to say the Rosary, though he was wearing one and had been to a Catholic school. I told him how.
The rhythmical repetition seemed to quieten him. After the third mystery, I told him we would stop and he left quiet as a lamb.

Poor boy, there are lots and lots like him in Brighton, not possessed, though they think they are but often quiet obsessed by evil; drugs and the street lifestyle tend to exacerbate it.

I also think I must get rid of the option of face to face confession or at least put in a grill of some sort, there is a little one so people can confess anonymously but then you can walk beyond it and there is no barrier, just a chair facing mine.
I hear confessions everyday here after the weekday Mass, sometimes it can be a little frightening, I can escape from my side but sometimes, actually not very often I do get very frightened.
Maybe there is no better way for a priest to die than in the confessional, though one wouldn’t want that sin on the hands of a penitent.
I do think that I hear better confessions from people who use the anonymous option. It also helps me to forget what the penitent has said, if I do not see the sinner. Sometimes one has to pray hard for the gift of forgetfulness, not a priestly gift to be despised.

The problem with getting rid of the face-to-face option is it gives a sign of being reactionary and denying people some thing.
at October 20, 2006

I never have liked face-to-face confession. I want the anonymity. Why would anyone not want anonymity? The confessional layout they have in the London Oratory is a good one, the priest is in a box and the penitent kneels outside and is visible, which protects the priest against accusations of any sort.

Put the grille back, and the altar rails too while you have got the builders in, the step is a trip hazard and if there is no rail then it needs to be indicated with yellow and black edging for Health and Safety reasons.

The person you are talking about could be suffering from a serious mental illness. It's called "care in the community" to let them wander round the streets and live rough.

Thank you, Father, for sharing that with us. It not only gives us a true insight into your devotion, but also into the heart of what it means to be a Priest and a human being.

Thank you, Father, not only for sharing, but for your pastoral care to this disturbed young man. In think you are right to reinstall a grille - priests have the right to protection. As Henry says, the layout in the Oratory, as indeed in many other large Churches, like St Mary Major in Rome, use this arrangement - and there are often long queues at this type of Confessional.

Sadly, I avoid going to confession at Brompton Oratory, mainly because the screen is not properly used.

I have also been put off going to confession in other places because the priest is visible. It is very distracting, and surely does untold damage. While I have never known anyone who likes face to face confessions, I have known people who will not go to confession simply because it is open, and troubling the priest to ask for one's anonymity to be protected (from him) defeats the purpose. Not surprisingly, they just give up. I don't think that priests themselves realise the scale of this problem.

Doesn't Canon law give us the right to a screen?

I don't disagree with what you write Father but do feel uneasy with a certain type of "traditionalist" where it seems that if we just fix external things all will be OK. Is there a danger of so focussing on the right to anonymity (I am not opposing the right)that we lose sight of other blessings that may come from lack of anonymity in the confessional (where one is happy with that lack of anonymity.) Of course this presupposes that one's parish preist is a good holy priest - but where he is and one confesses regularly to him it is likely that despite visual guards the voice will be recognised. Such openess can sometimes help eg at the moment of x or y temptation as knowing one will confess to him may help in resisting the temptation. I think this very human element can be part of keeping us living in OUR LORD'S GRACE. Many of the Saints would have confessed to a regular confessor where there was no such anonymity. PS Don't worry I am not falling into Donatism!!