Cardinal Ratzinger ordaining priests according to the Tridentine Rite 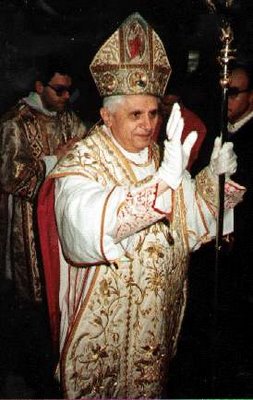 I have to confess I love clerical gossip, not the wicked destructive type than kills reputations and drags everyone into hell. Well what seems to be the subject of rumour and gossip at the moment among clerical circles is the extension of the "indult" to say the Tridentine Mass. Various high ranking ecclesiastics are saying the Pope is going to sign something in November, they might be the same people who had said it was going to be Holy Week, this year, or summer but this has being going ever since Pope Benedict was elected.

I am sure something is going to happen, sometime. What is more certain to happen is that Holy Father going to reply to statements of the Bishops who met for the Synod on the Eucharist last October, and maybe, just maybe, he might choose to extend the "indult" then.

I love Eastern Rites of the Liturgy and love Solemn High Tridentine Mass, the music, the colour, the antiquity of it is glorious; Low Mass however is another matter, it does enshrine the sacredness of silence but to be honest from the congregations point of view it is a bit dull.

I am a supporter of the Tridentine Mass, really because without it the present Mass, is as the Pope say, rootless, "ex nihil".

The Tridentine Mass, parts of which vanish into antiquity, was the liturgy that formed Europe, responsible for so much of its architecture, its painting, its music. I personally think its abandonment contributed greatly to the secularisation of Europe in the 20th century. Whether its limited restoration, for those who want it, will change much, time will tell.
Fr Benjamin Durham FSSP celebrates in the Tridentine Rite here on 3rd Sunday of each month, that this Sunday.
at October 11, 2006

Bless you Father. I'm privileged to live near a Latin Mass Community in the cure of FSSP Priests! Daily Mass, Catechism, the Sacraments, as we say in the States, "the works"! It's wonderful.

"It is elitist, dated and Western". Not my remark - it was said in another blog, referring to the traditionsal music of the church. Please show how this statement is nonsense.