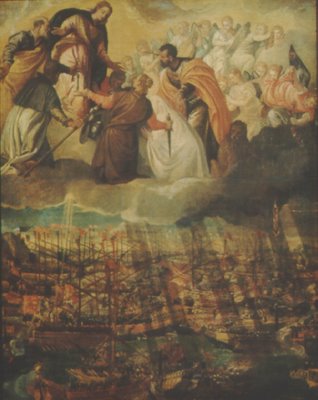 Remembering Lepanto The same week we remember St. Francis' example, we also celebrate the important contributions of St. Dominic, contemporary of Francis and founder of the Dominicans. Notable among his contributions was the praying of the rosary. St. Dominic received the rosary from the Blessed Virgin in a vision while trying to convert the Albigensians in 1208. Mary told the great saint that the rosary was a "weapon the Blessed Trinity wants to use to reform the world." At the Battle of Muret on Sept. 12, 1213, the Marian prayer brought about the defeat of the Albigensians and saw the first shrine built to Our Lady of Victory. Throughout the centuries, the rosary has been recited especially in times of danger to implore the aid of the Blessed Virgin. This Oct. 7 will be the 435th anniversary of the Battle of Lepanto, the event which gave the liturgical feast of the rosary to the world. Throughout the 16th century, naval clashes with the Turkish fleet had been increasing. Having taken Constantinople in 1453, the Ottoman Turks were building a fleet with the intention of conquering all of Europe, first by sea, then by land. The Turkish fleet was seemingly invincible -- well appointed, superbly led and unflinchingly aggressive. They had captured Cyprus, Rhodes and had only been narrowly repelled at Malta. Pope St. Pius V, zealous Dominican reformer and friend of St. Charles Borromeo, hoped to stave off the next inevitable attack before it happened and managed to bring together the king of Spain and the republics of Venice and Genoa as well as the papal fleet to stop the Turkish fleet from leaving its own waters. This remarkable alliance was comprised of many traditional enemies who succeeded in putting aside their differences to aid their common cause. They set sail 200 ships strong to engage the 220 ships of the Turkish fleet. Pius V, besides his personal penances, enjoined the entire Catholic world to pray the rosary and organized processions throughout the city for the Marian prayer. On Oct. 7, 1571, while working with his cardinals, Pius V looked up and said, "A truce to business; our great task at present is to thank God for the victory which he has just given the Christian army." Indeed, in a few short hours Don John of Austria, commander of the Holy Alliance, had won the day, not only defeating the Turkish fleet but also freeing almost 20,000 Christian galley slaves from the Turkish boats. Thus began the feast of Our Lady of Victory, later changed by Pope Gregory XIII to the feast of Our Lady of the Rosary and extended to the whole church by Clement XI in 1716. Pope John Paul II of blessed memory reminded Catholics that in our modern age we are in more need than ever of the rosary. In the wake of the tragedy of Sept. 11, 2001, he declared, "Within the current international context, I invite all -- individuals, families, communities -- to pray this Marian prayer, possibly every day, for peace, so that the world can be preserved from the wicked scourge of terrorism." A year later, he added the luminous mysteries to the rosary to focus on Christ's public ministry. In these troubled times of unexpected dangers and flare-ups of hostility, Christians can remember that while might fails, and reason breaks down, the most effective weapon in the Christian's arsenal is prayer.
at October 06, 2006

Email ThisBlogThis!Share to TwitterShare to FacebookShare to Pinterest
Labels: history