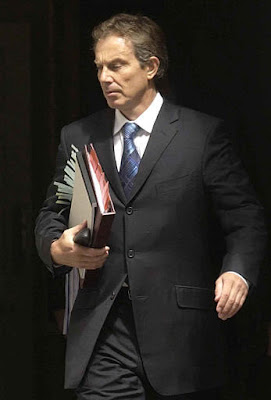 April 4, 2008 (LifeSiteNews.com) – Stonewall, England’s largest and most well-known homosexual activist organization, held its annual fundraising dinner last night, raising over £300,000. A sizeable chunk of the funds raised came in thanks to former British Prime Minister Tony Blair – the same Tony Blair who was received into the Catholic Church only a few months ago by top English prelate Cardinal Cormac Murphy O’Connor.

The opportunity to have tea with Tony Blair secured a bid of $40,000 in an auction held at the dinner. Incidentally Blair was the keynote speaker at last year’s Stonewall fundraiser. During his speech Blair thanked the gathered attendees for their help in passing his legislation to permit homosexual civil unions. Blair said that of all the pro-homosexual legislation passed in recent years, the civil partnership law gave him more than just pride, "it actually brought real joy." The first same-sex civil union caused him to give "a little sort of skip," he said, it was "just so alive, and I was so struck by it."
at April 08, 2008

And this is the same TB who proclaimed in frtont of the Cardinal on reception into the Church that he accepts all that the Holy Catholic Church believes, teaches and professes to be revealed by God.

If two people want to live together in a permanent relationship, that surely is their affair.

My neighbours, two men, lived together happily for thirty years and the relationship was ended only by the death of one of them. This is possibly an unusual situation, but what went on in their bedroom is none of my business but whatever it was, or was not, there are worse things going on in the world to get worked up about.

The problems arise principally in relation to property rights eg inheritance tax and tenancies. Instead of dealing with the matter the government went down this route, leaving people living together in other sorts of relationships still getting caught in the legislation eg somebody looking after an aged person not a parent.

Sadly, Christians rose to the bait instead of attacking the underlying injustices related to property rights and taxation.

Another absurdity is that two single people receive preferential tax treatment compared to a married couple as they receive two allowances instead of one. This is, in effect an attack on marriage, but the real problem, and it an ethical issue, is that the individual person or household is the unit of taxation and penalised for working.

Now the moral degeneration and poverty THAT causes really is something that demands our attention. Does it get it? Whenever I raise the matter with people who ought to get concerned, the usual responses are that it is too complicated to understand (in other words they can't be bothered to consider it) or that the poor are always with us (an excuse for doing nothing).

A little sort of a skip?

May one safely assume that he is 'broadly Catholic' and of The Tablet fraternity?

One thing is certain: the Church of England is strengthened by his departure, and that meagre offering, in these impoverished times for the national church, is a welcome source of encouragement - albeit clutching at straws.

God will give him his just rewards, if the cardinal who accepted him into the Church really loves him and desires his salvation he should be doing something about this.

"Be not deceived, God is not mocked." Galatians 6:7

What I think about all this is simply not printable!

Well whadya expect? He didn't dojoined up government very well, so he's hardly likely to do joined up Catholicism, is he?

The best thing Blair could do would be to keep quiet until the children were grown up, then give his money to a trust and join a silent order of monks and never be heard of again. Same for Cherie.

I seem to recall Prince Philip's mother became a nun. It is a good thing for prominent people to do when they retire.

He has a knack of putting his foot in it with every word he says. I ascribe it to extreme naivity, I don't believe there is any intention to do harm, he wants to be nice to everyone and that is the trouble.

he cared little for socialism ; he acts like he couldn't care less about catholicism - as usual he knows better - I just cannot believe how arrogant, spoilt and ignorant he is on so many levels - and his intellect is both flabby and shabby....

OK, Henry, let's concede that what goes on in the bedroom is of no concern to anyone else.

The govenment started by giving non-married heterosexual couples fiscal and property benefis similar to those previously reserved to married couples.

Then the gays complained that they were being discriminated against, so the government extended the same benefits to them by way of the civil partnership law.

So if you live with someone else you're not married to, you only get the benefit of the law if you do so with a view to sexual activity.

That discriminates against households of two or more people living together without a view to sexual activity, such as flatmates, students and cousins who live together in furtherance of their common life in their extended family.

Michael, Henry,
Let us NOT concede "what goes on in the bedroom is of no concern to anyone else".

What is done in private determines public attitudes. What happens in the dark shows itself in the light.

As Christians we are concerned with the heart.

I thought "Stonewall" was a subversive organisation prepared to go to any lengths to secure their demands.

It would seem that Tony Blair would do anything for money,is it possible he got bunged to get involved with Bush and that bunch of War Criminals.

Sorry, Father, I should clarify.

I should have said "Let's concede for the sake of argument", as it was beside the point I was setting out to make.

In the alternative, I should have raised and put to one side the question of whether sexual acts done in private between consenting adults were of concern to the civil authorities. The civil law doesn't punish sodomy any more, and I don't know that it ever imposed criminal sanctions for fornication and adultery.

That again was beside my point, which was about the civil effects of cohabitation and marriage as regards property rights, taxes, etc.

Don't know how he sleeps in his bed!

My opinion of the Blairs is unprintable.
Neither has ever shown any strict adherance to Catholicism.
I well remember the pictures of Cherie with blown up condoms.
Unfortunately many say "I believe" for various reasons not necessarily related to actual belief.
In a similar vein, but not exactly related to the Blairs, how many actually stand up in Court and take the Oath and proceed to tell lies.
Perjurers are everywhere.
Perjury means nothing to the vast majority who step into a courtroom.
I have seen it all too often.

Is it fair to assume that the clergy who were instrumental in ushering Tony Blair into the Catholic Church are in a similar state of dissent from Catholic moral teaching as their newly received "convert"?

Francis,
No one receives some one of Blair's prominence weithout careful preparation. It eould seem they have an agenda.

Blair and New Labour have been a disaster from any point of view. Support for silly causes like gay marriage is peripheral to the real evil that has been done.

Top of the list is his compulsive engagement in wars. None of them have led to the resolution of issues; those in the Balkans have sown the seeds of future conflict. Afghanistan is a black hole, as the British should have realised from their nineteenth century experiences, whilst there is no prospect of a settlement in Iraq.

On the home front, his economic policies have left an evil legacy which is just starting to appear. It was Labour's economic policies which created an idiotic housing and credit boom, with families running up debts amounting to trillions of pounds, much of which was spent on imported consumer trivia. Now the bills are coming in, which is why the UK pound is turning into toilet paper. Next, expect recession and inflation at 1970s levels or worse, punishing hard-working and thrifty people and rewarding the feckless.

And of course the removal of controls on dubious scientific research is largely to enable some fat cats somewhere to make a fast buck.

None of the policies are family friendly but surely we need to understand what is going on and prioritise our attacks?