Judge: Family life is in meltdown 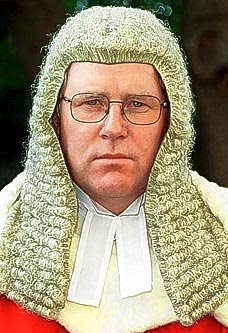 Family breakdown is a "cancer" behind almost every evil affecting the country, a senior judge will declare today.
Mr Justice Coleridge blames youth crime, child abuse, drug addiction and binge-drinking on the "meltdown" of relations between parents and children.
He warns that the collapse of the family unit is a threat to the nation as bad as terrorism, crime, drugs or global warming.
The speech to family lawyers contains a fierce attack on the "neglect" of successive governments.
The 58-year-old judge, who is married with three grown-up children, will say family breakdown is an epidemic affecting all levels of society from the Royal Family down.
It is "on a scale, depth and breadth which few of us could have imagined even "a decade ago. It is a never-ending carnival of human misery. A ceaseless river of human distress.
"I am not saying every broken family produces dysfunctional children but I am saying that almost every dysfunctional child is the product of a broken family."
The judge, who is in charge of family courts across South-West England, will say he has a duty to speak out.
He will call on the Government to put the family at the top of its agenda, alongside the economy and the war on terror - and make it "rather more important than taking oaths of allegianc".
His speech will say: "Families are the cells which make up the body of society. If the cells are unhealthy and undernourished, or at worse cancerous and growing haphazard and out of control, in the end the body succumbs.
"In some of the more heavily populated urban areas, family life is quite frankly in meltdown or completely unrecognisable . . . it is on an epidemic scale. In some areas of the country family life in the old sense no longer exists."
The judge condemns families with a mother and several absentee fathers.
He says: "Single parents often do a fantastic job, but a great many, perhaps through no fault of their own, do not.
"A large number of families now consist of children being brought up by mothers who have children by a number of different fathers, none of whom take any part in their lives or support or upbringing.
"These are not isolated, oneoff cases. They are part of the stock-in-trade of the family courts."
Judge Coleridge has spent the past eight years presiding over cases of divorce, children in care and family break-up.
Last year he supervised courtroom attempts to negotiate a voluntary divorce agreement between Sir Paul McCartney and Heather Mills.
He will say: "Almost all society's ills can be traced directly to the collapse of family life. We all know it. Examine the background of almost every child in the care system or the youth justice system and you will discover a broken family.
"Ditto the drug addict. Ditto the binge drinker. Ditto those children who are truanting or who cannot behave at school.
"Scratch the surface of these cases and you invariably find a miserable family, overseen by a dysfunctional and fractured parental relationship - or none at all."
Calling for action before it is too late, the judge will say family breakdown is as serious as global warming.
"It is as big a threat to our society as terrorism, street crime or drugs, but far more insidious. It will be more destructive than any economic decline caused by international markets."
Mr Justice Coleridge says it is too late to help families just by bringing back tax breaks for marriage.
He sets out a five-point plan including more effort to educate parents and children on how to keep families together.
The judge also calls for higher spending on family courts, more court time for family cases and modernisation of the laws on divorce and family break-up.
He will absolve any political party of sole blame for family collapse and point to neglect before Labour's time in power.
But he accuses the government of "fiddling while Rome burns" and dismisses "highsounding declarations about taking children out of poverty" as insufficient.
Latest figures show marriage rates at a historic low and divorce at a historic high.
Children from single-parent families are far more likely to do badly at school, suffer poor health, fall into crime, drug abuse, heavy drinking and teenage pregnancy.
Daily Mail
at April 05, 2008

'A lone voice sounding in the wilderness!'

While I applaud Justice Coleridge and agree entirely with his comments the cancer of family meltdown is being fuelled by government - constantly and persistently. The relativistic, secular, humanist ideology is at the core of the problem but their stranglehold within the UK political system affecting education as well as law and order, and of course almost total control of the media makes it nigh on impossible to make for change. However, change is what is required. A new direction must be established. And where do we find this 'new' direction - simple, it's all there, within the Gospels of Our Lord Jesus Christ.

The Good News is there and we still ignore it at our peril.

"It is understood he will call for laws relating to unmarried couples to be modernised, giving cohabitees legal rights on separation, enforceable pre-nuptial agreements, and for reform of divorce law to remove the "fault" element and blame from the process."

Excellent diagnosis! But the first rule of good medicine is, never make the patient any worse.

Quite apart from the nonsense of deriving from "to cohabit" a noun in the form of a direct object of an intransitive verb, his proposed cure would get him slung out of Harley Street.

What we need is the exact opposite:

(1) no more civil divorce with right of remarriage during the life of the spouse;

(2) no separation for either spouse without proven fault in the other, and (apart from adultery) then only as long as the cause persists;

(3) an unlawful deserter forfeits custody of children and all common property apart from personal effects.

These things are only going to get worse while the secular humanists are running the Government, they think they can create a man made utopia without God who they claim does not exist, they are wrong and all of us will suffer for their pride.

For the past 150 years the intelligentsia rubbished religion and the restrictions it advocated. Eventually the message got through to the poorly educated masses. Meanwhile, the ruling classes pursued the family-unfriendly policies of colonialism, with its inevitable consequences including the two world wars. World wars are also not a family-friendly activity.

The problems described are the result
It is not going to be so easy to put humpty dumpty together again. We are in a position to make a start, but how and where?

When I was a teenager, having a baby without benefit of a marriage never made the headlines. Actors and Actresses didn't adopt children unless they were married. And not many people flaunted their "sinful" ways. Today, "anything goes" and "if it feels good, it must Be good." And now we have Oprah telling people that they are their own god, that there is no sin and no need of redemption. And she's influencing over three million television viewers with her New Age cult.

The Church and all churches have a God-given mandate to preach the truth and to speak the truth in love.

Humanity is following the crooked road to destruction. Justice Coleridge is the voice of one crying: "In the wilderness of your lives, make a straight path."