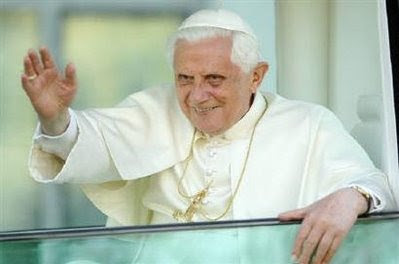 At yesterday's liturgy what struck me most was the contrast between the prayerful demeanor, gestures, voice and general attitude of the Holy Father, set against nonsense of "the production". Archbishop Wuerl, with his "Church in America is wonderful" set speech, the readers and the musicians were performing, the Pope alone was the prayerful heart of the liturgy. The celebrant makes such a difference, as he is continually saying.

I was very impressed too that he met the victims of sexual abuse face to face, you get the impression most American bishops leave that to officials and prefer to meet them in court or through their lawyers and are concerned more abo0ut the financial rather than implications. Here, and in his conern for innocent priests, hurt by this scandal, he has shown himself a good shepherd.

What comes out most is the profound humility recollected prayerful of the Vicar of Christ, even to the point of suffering a liturgy which seemed so contrary to everything he has written and said, both as Pope and before his election.

added later
Are these things linked?
I wonder if the lack of humility, exemplified in this liturgy, is linked to the inability to first admit the sex abuse scandal by Am-bishops and then to bring healing. How we view the liturgy illustrates how we view the Church, the faithful, ourselves ...and ...err God.
As Fr Zuhlsdorf says, "save the liturgy, save the world", or at least the Church, just a tentative thought.

Exactly, Father! I have noted this in the past when the Holy Father was in a large Mass setting. He exemplifies what he has written about the Liturgy: "This is not about me. It is about Him".

Unfortunately, many in the Church here in the US - clergy and laity alike - don't 'get it'. And they don't get it because they never had it. Imbued with a false 'Spirit of Vatican II' mentality, they see the Mass as all about 'me', about 'us' - the celebration of the community ("Aren't we great?").

It is the "closed circle" the Holy Father referred to in his writings. But Pope Benedict leads by example and, with the help of the Holy Spirit, that example will prevail!