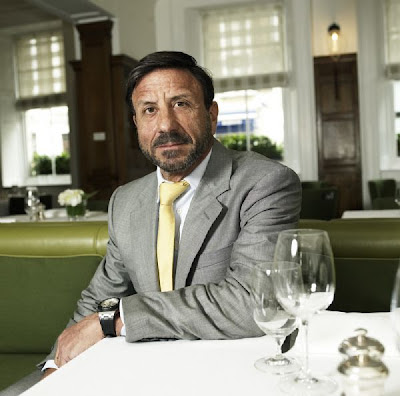 First Post
Tony Blair's decision to convert to Roman Catholicism has not delighted everyone. Take Rocco Forte, the multi-millionaire hotelier and director of the Catholic Herald. "I don't think Blair is a particularly deep thinker," he told the Observer. "I don't find him a deep man. He was always voting against Catholic principles; for example, he voted for abortion. He constantly voted against the ideas of Catholicism."
Even Tone might be surprised by this broadside. After all it was Forte who stumped up the money for the launch of his Faith Foundation at Westminster Cathedral 10 days ago, a grandiose event at which Blair announced that he was "promoting the idea of faith itself, as something dynamic, modern…" etc, etc.
However, it transpires that Forte never had any intention of lending Blair a hand with his Foundation. When he agreed to finance the lecture, which was one of a number arranged by Cardinal Cormac Murphy-O'Connor, he didn't know TB was going to be participating. No doubt peeved by this, when the big day came Forte found he had a more pressing engagement.
at April 14, 2008

I like this idea of abstract faith. It is completely inclusive. You can have faith in bags of stones and feathers, trolls, chicken's entrails, Wicca, the Man in the Moon, the Duke of Edinburgh, lumps of stone. The possibilities are endless. What diversity shall we enjoy!

Only somehow I think the main beneficiary will be the one depicted with horns and a spiked tail.

I always liked the great Oscar's comment when asked why he had not attended some social engagement:

"I found I had a subsequent engagement."

There was a big clue to this in the Catholic Herald's full page interview with him a couple of weeks ago. He was talking about the forthcoming lectures, and as I super-quick-scanned-read it for the words "Tony Blair", to discover they weren`t there, I did think "you`ve been had, mate." And he has. I suppose PR's not everyone's "Forte".

I would far sooner listen to what Rocco Forte has to say than Tony Blair or the 'whodoyawhatsit' from the BBC. Shame he was not invited to give a lecture.

I felt a bit sorry for T. Blair really. He has a bit to go and someone put him in a very exposed position. In years to come he may look back and feel very betrayed by it all.

You write: 'Tony Blair's decision to convert to Roman Catholicism has not delighted everyone'.

Well! While I admit it seems to have delighted many anti-Catholic groups, such as Stonewall, it certainly hasn't delighted anyone I know. It is as if, having done his best to destroy the Catholic Faith here from without, (and he did a pretty thorough job of this while in office), he intends to finish the job from within.

And what a slap in the face this decision was for Rocco.

At least it will stand as a sharp lesson to anyone else thinking of helping to finance Church projects, or bequeathing money to various dioceses in their wills. They need to be a lot more circumspect, and perhaps send it to reputable missionary societies instead.

If Mr Blair had been a thinker at all it is quite possible that a MILLION lives would have been saved in Iraq.I have done some private research and it seems that Mr Bush and that bunch of WAR Criminals would not have gone ahead with the invasion.

Of course he knows that,and he must also know that he can never get Absolution.

If Mr Forte was financing a number of lectures, he may have inadvertently also finance that recently given by Mark Thompson, Director General of the pathalogically anti-Christian BBC.

Mr Thompson used the Cathedral pulpit to challenge journalists to be bolder when dealing with Islam. Which is a bit rich, coming from the man who leads an organisation which is content to screen Jerry Springer the Opera, and consign the Bible to Room 101 but would not do the same to the Qur’an – for fear of causing offence to Muslims.

The BBC is also content to produce a documentary on Jesus from the perspective of Islam, but would not do the same for Mohammed - for fear of causing offence to Muslims; is content to screen programmes about Christians converting to Islam, but has not dared to examine conversions from Islam to Christianity - for fear of causing offence to Muslims; and refers to those who tried to bomb Glasgow Airport as 'men' and 'doctors - not once was the fact that they were Muslims mentioned at all.

Incidentally, what is Cardinal Cormac Murphy-O’Connor up to? The pulpit of Westminster Cathedral appears to have become a veritable secularist-ecumenical Hyde Park Corner.

Ma Tucker ? you feel " a bit sorry for T. Blair " ? well, by all means come and adopt him as a potential candidate for your elections in November. He`s wrecked one major world power, I`m sure he could wreck yours.

Bernedette, I'm no fan of the man nor his crackpot ideas. I just can't bear to see people making complete eejits out of themselves and being encouraged and given a podium to do so by others who are supposed to be guiding them in love and truth.

It seems to me that Mr Blair is being used and I don't like it, no matter how wayward his actions in the past. Cardinal Murphy O'Connor is quite an intelligent man. I would be very surprised if he was invincibly ignorant regarding the thrust of Mr Blair's perspective on "faith".

"...he must also know that he can never get Absolution."

Can he be forgiven for a MILLION deaths in Iraq?

I don't think this is the place for hyperbolic statements. One million indeed! Even the Lancet Survey - subsequently discredited - never put the number nearly so high.

You disagreed with the invasion. Fine, but there is no reason to invent figures for the sake of your argument.

And of course absolution is available to him, as it is to you, me and all sinners.

If it kelps, Nickbris, the Iraq Body Count - not an organisation sympathetic to the invasion or its aims - has the best estimate of deaths due to the invasion to date as: 82,772 – 90,305.

maybe recusant would be a little less argumentative if he included in those death figures all those killed in the pre-war blanket bombings and those indirectly killed by economic sanctions [ at least 1.5 million children ]

I've always loathed Blair right from the bottom of his cloven hooves to the tip of his pitchfork - but it doesn't prevent me praying for his conversion and for all sinners. 'Forgive us as we forgive' dudes !!

Come on guys - we all get the point and we're all on the same side remember. God Bless.

Aside from Priests, who really does have the authority to teach from pulpits about Faith and Morals?

The annoying thing about Blair is not his conversion to the Faith, but his refusal to publicly acknowledge his mistakes on abortion votes, civil marriage for homosexual couples and yes, the war in Iraq. Surely, having sent out the wrong message for so long his very public conversion demands a very public turnaround.

Yet, every time he is asked about Iraq he says, "I did what I thought was right" or "I did what was right". Now that he's not in office, it's a good time to say, "I was wrong" and to show some humility. But I guess if he did that the lecture tours and numerous business deals would suffer!