China moves to limit access to Catholic shrine in Shanghai 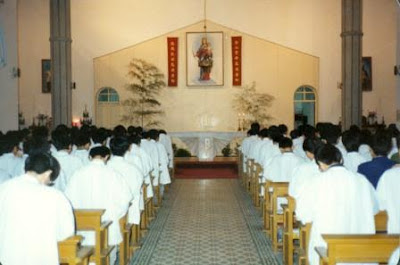 In this Olympic year:
SHANGHAI, China — Chinese authorities are trying to limit access to a Catholic shrine in Shanghai during pilgrimages next month, in an apparent sign of anxiety over large religious gatherings.
Although such restrictions are common, this year's May pilgrimage to Sheshan's Marian shrine is considered especially significant, and the crowds are expected to be much larger than usual. Pope Benedict XVI mentioned the shrine in a letter to Chinese Catholics last year calling for unity and renewed ties between China and the Vatican. He designated May 24 as a day of prayer for the church in China.
Hong Kong-based scholar Anthony Lam said officials with the Shanghai diocese had asked him not to arrange pilgrimage groups from the Chinese-governed territory.
"Maybe they're worried about something like what happened in Tibet, but I guaranteed no, no, no," Lam said, referring to recent anti-government protests. "Of course, we felt a little bit disappointed and frustrated."
China's officially atheistic Communist Party forced Chinese Catholics to cut ties to the Vatican in 1951, and the sides have not restored formal ties.
Although the most onerous restrictions on religious activity have been lifted, many of the country's estimated 12 million Catholics worship in congregations outside the state-approved church.
Sensitivity over the gathering in May could also be due to concerns about political or religious activism surrounding the upcoming Beijing Olympics.
About 100,000 visitors are expected to visit the shrine in suburban Shanghai this year, said Liu Bainian, vice chairman of the Chinese Patriotic Catholic Association, the party-controlled body that oversees the state-backed Catholic church.
That is several times the usual number, and Liu said the strain could be too much for the small shrine to handle.
Shanghai tour operator Bao Xia said city officials have asked his company, the Jin Jiang group, not to organize trips to the shrine next month.
The Shanghai Daily newspaper said only cars with special permits would be allowed near the shrine during key times.
The secretary to Shanghai's bishop also warned of possible overcrowding but said no one has been told not join in the pilgrimage.
at April 25, 2008