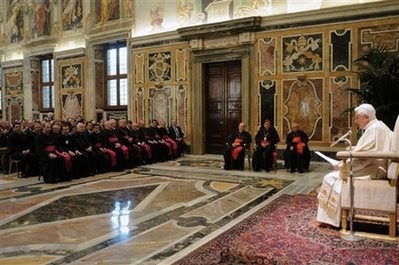 In this photo provided by the Vatican newspaper L'Osservatore Romano, Pope Benedict XVI delivers his message during an audience to participants of a plenary assembly of the pontifical council for the family, at the Clementine Hall at the Vatican, Saturday, April 5, 2008. Benedict XVI calls abortion and divorce 'grave sins' and warns a 'culture of death' might put the lives of the elderly at risk. Benedict's remarks Saturday during audiences at the Vatican are his latest defense of the traditional family, based on marriage between man and woman and of human life from conception to natural death.
Posted by Fr Ray Blake