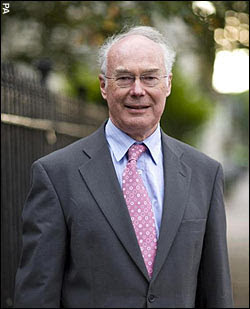 from The Daily Telegraph
Britain's latest winner of the medicine Nobel prize has criticised the Catholic Church for misrepresenting and exaggerating the dangers posed by research on animal-human hybrid embryos.
Cardinal Keith O'Brien, the president of the Bishops' Conference of Scotland, made headlines when he said that such research is "an unprecedented attack on the sanctity and dignity of human life" and could lead to the creation of hybrid babies. He said the experiments were of "Frankenstein proportions".
"I am astonished," said Prof Sir Martin Evans, stem cell pioneer and director of the School of Biosciences, Cardiff University.
He believes the research, such as the recent creation of cow-human hybrid embryos in Newcastle, is crucial in laying the foundations for many future treatments.
Sir Martin referred to "the fuss" about research on hybrid embryos and said there has been "a lot of misinformation flying around". He will chair a session next week at the first national stem cell conference in Edinburgh.
Although most of his criticism is directed at the Church, he believes some scientists have hyped up the benefits of creating the hybrids, technically called cybrids.
Sir Martin agreed with the cardinal that the research is more concerned with fundamental understanding than actual treatments.
He said: "What we are talking about are artificial constructs created and used in the lab, and never going further than the lab, certainly not at the moment.
While in embryo form, it is entirely illegal to put one in a human uterus, or an animal one."
Moreover, there are technical reasons why the embryos are unlikely to develop for more than a few days. "The embryo has no reproductive future. All the ideas about monsters are hype," he said.
Sir Martin said human-animal cell hybrids had been made for many years.
"Cellular hybrids have a long history and no one has ever looked at these issues before - raising new issues of human dignity and things of this sort shows ignorance," he said.
The professor, who won his Nobel prize last year for stem cell work on mice, said hybrid embryos are a means to obtain knowledge to pave the way for future treatments.
at April 07, 2008

"Cellular hybrids have a long history and no one has ever looked at these issues before - raising new issues of human dignity and things of this sort shows ignorance".

Wow! The Prof thinks that cellular hybrids have a longer history than the Church's teaching on human dignity.

And the Prof seems to have missed the point that cellular hybrids are not the issue, but embryonic hybrids. A blood cell, a bone cell, a cell from the liver, none of these constitutes a person. A single fertilised egg though, that contains all the information necessary for the ongoing development of the person.

Also, the only way to prove an embryo does not have a soul is to prove that none of us have a soul. Perhaps that is part of the agenda?

These people are meant to be so intelligent yet they same incapable of understanding the Churches simple position.

No one is talking about dangers to us personally, it is about the human dignity of the embryo's to have their right to life respected.

This professor couldn't be biased and be deliberately misrepresenting the issue by any chance could he given that his job depends on such research.

The hybrid embryo is a perversion.

The end never justifies the means.

Therefore, nothing justifies the development of hybrid embros.

You don't have to be a Nobel prize winner to understand that.

The spiritual soul, dear professor! Man may have arisen from the animal kingdom, but the soul makes him belong to a different order of being, which is what Cardinal O'Brien was getting at. To mix human and animal is an obscenity and is an offence against the Incarnate Word...

Now how do you explain that to the scientists, especially as they are empiricists who demand that everything be proved scientifically?

Pray that the existence of the soul will one day be discovered scientifically, I guess.

There is an interestin piece in today's Times entitled "Not an answer to Catholic prayers" about IPS cells. You may not agree with it but its worth reading

The real baddie in this legislation is the provision for savious siblings and the one that dispenses with the need of an artificially produced child to have a father.

These are matters of certainly as to both law and fact.

What is the rule of conduct in cases of certain law and doubtful fact? An animal-human hybrid, drawing material from two gametes of which only one is human is not - or is only doubtfully - a human individual.

The depths that these individuals have sunk to is cloaked by their status in British society. It also reflects the depths of British society.
I wonder how long our Heavenly Father will permit this to continue. There has to be an outpouring of the wrath of God before long.
How long O Lord, how long!

"What we are talking about are artificial constructs created and used in the lab, and never going further than the lab, certainly not at the moment."

Doesn't that "certainly not at the moment" speak volumes!

What is produced is part human based on the simplest of reasoning, if we are told the chimps are our biological cousins and so should be cared for how much more related would we be to a half human clone?

Science can't have it both ways.

Common sense tells us that playing God in this way is abhorrent and most men who do not have a personal or emotional attachment to this issue are rightly repulsed by the very thought.

Cybrids, hybrids what I ask is 'whybrids'???

What is all this pseudo-science for when all the evidence from 20 years or so reasearch thus far has not got us one iota nearer the miracle cures promised for Alzheimers, Cancer, Parkinsons etc...

It is sheer bloody 'tinkering' and 'playing god' and doing these experiments simply because they can. My honours degree was in biology and I belong to biological associations and I have to say that I am ashamed of my bio-sciences colleagues who appear not to see that they are experimenting on human beings - WHICH EMBRYOS AND FOETUSES ARE.

One final telling little phrase which I picked up on from his majesty the poet laureate nobel anti-Catholic Sir professor his eminence the Martin Evans - yada yada yada yada ....'and never going further than the lab, certainly not at the moment'.

Well, we are NOT stupid. You have just stated Sir Nobel Laureate, for the record that the HFEA in the UK will continue to go on and on down this morally and scientifically bankrupt road of research wasting valuable £millions at the expense of human life. When the 'human-cow/goat/cat/mouse/hippo or whatever cybrid' crawls out of its petri-dish and bites you on the arse perhaps you'll take note.

...and of course he wouldn't have a vested interest of course. If this were a peer-reviewed publication he would have to give details of grants he had received to do this research.

Volpius Leonius says that a human-animal hybrid is part-human. In fact, the human matter is presumed to be organically a part of the body of the human parent, and is not distinct from that parent.

The question is this: is the hybrid a person or not?

One of several things which make me angry about the misinformed comment on this issue is the way in which people like Sir Martin Evans deliberately or negligently misquote Cardinal O'Brien. I particularly have in mind "All the ideas about monsters are hype". What the cardinal actually said was "This Bill represents a monstrous attack on human rights, human dignity and human life." You'll not find the letters 'm'-'o'-'n'-'s'-'t' anywhere else in his his now-famous Easter sermon. The only misinformation here is coming from "stem cell pioneers" like Evans.

And, speaking as a physicist, one of the other things that make me very angry is being lumped together with people like this under the catch-all term "scientist". Let's describe them as what they are - biotechnologists.