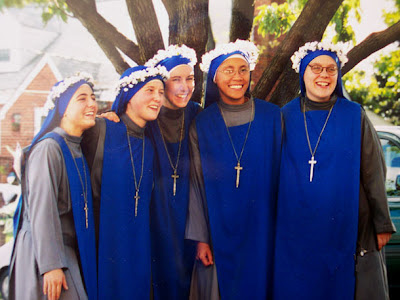 During the event, organizers explained symbolic aspects of religious apparel. Among the show's sponsors were the Polish bishops' committee on vocations, university president Father Stanislaw Wilk, and the Northern Poland Jesuit province.

The same report noted a connection between diocesan priestly vocations and past service as altar boys. In the Katowice archdiocese, 90% of seminarians indicated that they had previously served as altar boys.
at April 11, 2008

The drop, if I remember rightly, is in the active/apostolic female orders. The contemplative ones continue to do well.

I think winner of the best dressed religious order should go to Heralds of the Gospel. You don`t miss 'em, that`s for sure.

Dear Fr. Ray,
The Poles continue to, "Be not afraid!" As an American of Polish ancestry it awsome to see such an alive faith in Poland.
JMJ
Joe