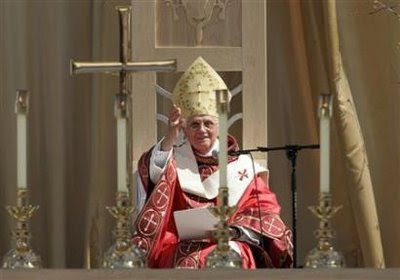 (from CWNews.com) - Since it is virtually impossible to keep ahead of the avalanche of stories about Pope Benedict's trip to the US, let me just pick out three particular debates for comment:
1. Fallout from the sex-abuse scandal
The mass media have focused almost obsessively on the Pope's words about the sex-abuse crisis. But in all fairness, one should notice that it is Pope Benedict himself who opened the discussion, speaking candidly first to reporters on the plane that brought him to the US, then twice again within his first 36 hours on American soil.
However somber and heartfelt the Pope's words have been, they are unlikely to satisfy the demands of abuse victims. As the Holy Father acknowledged, words cannot convey the suffering the victims have endured, or remedy the sense of betrayal they still feel. A sincere apology is helpful-- even necessary-- but it cannot provide the necessary emotional closure.
The time for words has passed; now action is necessary. And the only action that could begin to restore confidence in the American hierarchy is something the Pope was not likely to do in the context of a pastoral visit: Asking for bishops' resignations.
In his talk to the US hierarchy, when he confessed that the scandal had been "sometimes very badly handled," Pope Benedict wasn't telling us anything that we didn't already know. Yes, certainly; it was handled abysmally. But now let's go one step further: What were the mistakes, and who made them? More to the point, can we continue to rely on the bishops who were willing to sacrifice the welfare of children and the integrity of the faith? To ask the questions is to recognize the answers.

2. Pro-choice politicians
Pope Benedict has made it clear that Catholic politicians who support legal abortion should not receive Communion, since their public posture is grossly at odds with Catholic moral teaching, and their reception of the Eucharist would constitute a scandal.
Everyone knew the Pope's thought on this issue. But everyone also knew that prominent Catholic politicians like Senator John Kerry and Speaker Nancy Pelosi-- both ardent proponents of legal abortion-- would receive Communion at the papal Mass in Nationals Park today. Everyone knew, because the politicians announced their intentions in advance.
This is no small matter, because these politicians were not only creating scandal but also endangering their own souls. So how did the US hierarchy react? Were their warnings issued? Admonitions to avoid grave sin and scandal? I saw none. Only this quote from Sister Mary Ann Walsh, an official voice of the US bishops' conference: "People go to church and people go to Communion if they feel in their heart they are prepared to receive Communion.”
Judie Brown, the valiant head of the American Life League, begged the US bishops "to be extraordinarily vigilant in defending the Eucharist" during the papal visit. But her efforts could not compete with the assurances offered by the official mouthpiece of the US hierarchy, who was placidly assuring reporters that everything would be all right "if they feel in their heart they are prepared to receive Communion." Not a word about objective moral standards, the proper formation of conscience, the duty to avoid scandal, or-- most important of all-- the salvation of souls.

3. Catholic colleges and universities
As I write, the Pope is on his way back to the campus of Catholic University, to address the heads of Catholic institutions of higher learning. The Holy Father-- himself a scholar of prodigious accomplishment-- will be facing a very nervous audience.
With a few praiseworthy exceptions, the Catholic universities of America have shrugged off attempts to conserve their distinctively Catholic identity and to ensure that students receive an accurate understanding of Catholic doctrine. The powerful Jesuit universities in particular are hotbeds of theological dissent, contemptuous of the Catholic tradition that the Pontiff represents.
It is unlikely that the Pope will confront the Catholic university chieftains directly; that is not his style. Yet if he does not make his case with crystalline clarity, we can be sure that the public-relations machinery at these schools will shift into overdrive, churning out claims that the Pope has actually endorsed their flight from Catholic orthodoxy. Every word the Pope utters in praise of the Catholic schools will be repeated incessantly; every subtle criticism will be buried beneath a mound of exculpatory prose.
Speaking to the New York Times, Father Tom Reese-- the former editor of America magazine, and a leading champion of the Jesuit approach-- gave a remarkably candid appraisal of the audience Pope Benedict will face at Catholic University. He explained that if the Pope speaks in general terms, "about the importance of stressing Catholic identity, all the presidents will stand up and cheer. But if he says that we need to enforce this legislation about mandatums there will be a problem. It's pretty much ignored in the United States today."
Exactly. This speech may be the greatest challenge facing Pope Benedict on his American sojourn.
at April 18, 2008

Thank God we have Papa Benedict who is more than 'up to the various challenges' facing him during his USA visit. He will 'tell it as it is' and the US Bishops should be under no illusion that he means what he says. Remember, we belong to the One, True, Apostolic Church. Anything else simply 'aint' Catholic.

As for... "People go to church and people go to Communion if they feel in their heart they are prepared to receive Communion"... this is Sacriligeous Communion if I am not mistaken. All those 'feelings' dear Sister in Christ, should be confessed on one's knees in the confessional and reparation made for your lack of sense and understanding of sin.

The American Bishops have a lot of 'catch up Catechesis' on their hands. Their Graces should start writing those pastoral letters now, you know those 'fire and brimstone' ones that have been missing from the pulpits for some 40-odd years!

Judie Brown, the valiant head of the American Life League, begged the US bishops "to be extraordinarily vigilant in defending the Eucharist" during the papal visit. But her efforts could not compete with the assurances offered by the official mouthpiece of the US hierarchy, who was placidly assuring reporters that everything would be all right "if they feel in their heart they are prepared to receive Communion."

And we're meant to be believe that we're living in a new "springtime"...

I agree with you 100%. Digihairshirt had a comment on her blog -- what we needed to see was Benedict walking through the crowd of bishops saying "you, you, you, and you....you're fired."

And frankly, the pope and bishops are going to have to start doing something about Catholic politicians who are pro abortion who keep trotting up for communion without public renunciation of support for such practices. How about yanking some faculties?