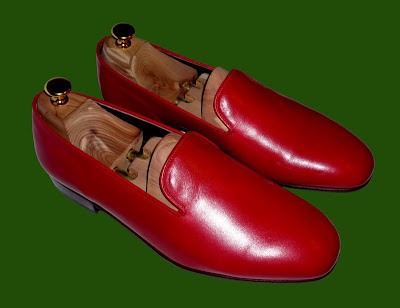 I like this, about the red shoes which I found on Amy's site:

After many false starts, the doors finally opened to reveal the Pope. He came down the steps toward his car and, then, headed toward the barricades on the lawn. I was standing close, but as he approached, I lost sight of him. He had to walk between two large shrubs and he is not a tall man.
The shrubs were a type of evergreen, trimmed round, fresh spring green. My eyes fell to the bottom of the bush. I do not recall focusing on the noise. All seemed quiet and time seemed to stop. I felt like a child playing in my neighborhood; looking beneath the shrubs, as I often had. What was I looking for in particular back in my childhood? Nothing in particular, looking beneath the shrubs was an exercise in pure desire, an exercise in hope.
Then, in a moment, I was recalled to the present. Amidst the spring green shrub I made a find, rather something emerged. I saw bright red. It had always been exciting to spy a red bird in the garden, so bright. The shoes! The images deluged my mind: fire from a bush, the shoes of the fisherman, the bloodied feet of Christ, St. Peter’s bloodied feet. The Holy Father had greeted Catholic educators yesterday evening with Isaiah’s words quoted by St. Paul: “How beautiful are the footsteps of those who bring good news” (Rom 10:15-17). The Holy Father brings Good News, Christ is our Hope! This morning we found abundant joy in Christ with each other. May the words of Psalm 65 be a prayer answered as the Holy Father travels to New York:
You crown the year with your goodness.Abundance flows in your steps,In the pastures of the wilderness it flows.

I thought they signified walking in the way of martyrdom.
at April 23, 2008

Red for martyrdom. The shoes of the fisherman. Peter the fisherman, the first Pope, martyred in what is now the piazza di San Pietro.

Does anyone know what the green ones are meant to stand for?