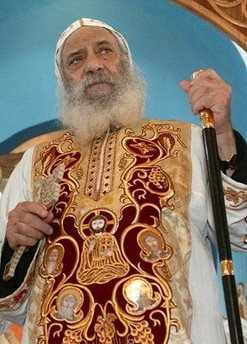 Not about Pope Benedict... I hope his luggage goes with him, not sent to Milan.

But...
I have often wondered what inconvenience a well dressed bishop would suffer at an airport, not just the bling but the very scratchy selice(s), the heavy penitential brass icons worn under one's shirt, the sacred relics that one had sworn always to carry on one's person, even the cloth covered metal cassock buttons, to say nothing of the bullion fringing on the stole worn under one's cassock.

Britain's ambassador to Egypt met with Coptic Pope Shenouda III, the Patriach of Alexandria, seen here in 2004, on Tuesday in a bid to defuse an escalating row after authorities at London's Heathrow airport tried to search the Orthodox pontiff.

Egypt said on Sunday it would step up airport security procedures for British officials after authorities at London's Heathrow airport tried to search the head of Egypt's Coptic Orthodox Church.Egypt has already complained to Britain after airport authorities on March 30 tried to physically search Pope Shenuda III, 84, who has a diplomatic passport, before he boarded his flight.

He was not physically searched but was "forced to go through a metal detector," Egypt's Deputy Foreign Minister Wafa Bassim told the Shura Council, the upper house of Egypt's parliament.As a result "we will apply the principle of reciprocity and treat British representatives the same way," following the March 30 incident. She said that a "firm letter" had been sent to the British Foreign Office about the incident.During the same session, Shura speaker Sawfat al-Sherif demanded an official apology from the British government.A spokeswoman for the British embassy in Cairo could not confirm that the letter had been received and declined to say whether ambassador Dominic Asquith would be meeting Shenuda to apologize for the incident.

But did the silly people at Heathrow really think Pope Shenouda III, the Coptic Patriarch of Alexandria , was a security risk ?

Who will be next, I wonder ?

The papal Nuncio ? The Ecumenical Patriarch ? The Grand Mufti ? The Dalai Lama ?

Meanwhile, if I were the Archbishop of Canterbury, I'd give Cairo airport a wide berth for the time being.

In his episcopal vestments and with his pectoral cross, does he look like an Islamic terrorist?

If that is what the people in charge of our security think and cannot tell the difference between a Christian prelate and someone who might be genuinely dodgy, then we really are in trouble.

Heathrow must be barbaric - look how they treat poor Naomi Campbell!
LOL!

Henry has out his finger on it. Secularists -- and the people they train -- can't differentiate between good religion and bad religion. It's just "religion."

By the way, I blame the secular media for the fact that the average Westerner has no idea that there are millions of Egyptian Christians - let alone that they are second-class citizens by virtue of their religion. There is a conspiracy of silence about the oppression of Christians in non-Western (and particularly Islamic) countries.

Another great thing about the blogosphere...

Frankly, I'm amazed, and pleased, that the Egyptian government is concerned about Pope Shenouda's dignity. They aren't known for their warmth to Christians.

I heard the story of an Orthodox bishop going through security at LAX. He carried his miter aboard the plane (as this is the most precious...and pricey of the regalia). An attendant asked the bishop to open the box, and thus seeing the miter (the Byzantine-style looks like a crown), the attendant asked him who he was.
"A prince?"
"No, more important."
"A king?"
"Nope, even more important."
"What then?"
"I'm an Orthodox bishop."

Security people are amongst the lowest paid,the education requirements are probably minimal.

They are given a few simple instructions and stick to it.Bit like concentration camp guards.

The same sort of people are looking at Traffic CCCtv cameras.Pointless arguing with them they are ignorant little people.

Their employers are coining it in and filling their boots

But you can't win. If you don't look remotely like anyone's idea of what an Islamic terrorist might look like you will still get stopped and searched when they have to make up their quotas to prove they are not picking on people who look suspicious which would brand them as racist. Though Moslem is not a race.