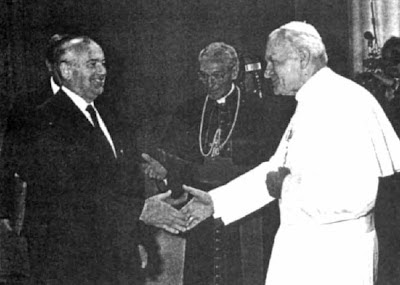 CPF
New, sensational documents concerning the attempt against the late pope, John Paul II, have been revealed in a new book by John O. Kohler, an American journalist and writer. The book, entitled ”It’s About the Pope. Spies in the Vatican”, will be released in Poland on Monday, April 28, 2008 by ZNAK Publishing House, known for its publications about the late pope. The author unearthed a Kremlin document, which listed Soviet Politbureau members, who had signed an “informal death sentence” on the Polish pope. “Use all available possibilities to prevent a new political trend, initiated by the Polish pope, and “if necessary - reach to means beyond disinformation and discreditation.” This instruction was given to their subordinates in the KGB by members of the Secretariat of the Central Committee of the Soviet Communist Party in November of 1979.
"I was shocked, when I found this order. The means “beyond disinformation and discreditation” meant only one thing: an approval to kill the pope”, John O. Kohler told leading Polish weekly “Wprost” (read: vprost) this week, prior to the official launching of his book in Poland. Who signed the “informal” death sentence against John Paul II? The party document obtained by the author of the book listed nine prominent Soviet CP members: the chief of the Soviet propaganda - Mikhail Suslov, members of the Presidium of the CC CPSU - Andrei Kirilenko, Konstantin Chernenko, secretaries of the CC - Konstantin Rusakov (responsible for the contacts with the Polish Communist Party), Vladimir Ponomarev, Ivan Kapitonov, Mikhail Zimyanin, Vladimir Dolgikh and Mikhail Gorbachev. An article, written by Michal Krzymowski quoting Mr. John O. Kohler, will appear in the next issue of “Wprost” weekly, on Monday, April 28, 2008 - on the very day the new book is to be launched and put on sale in Poland.
at April 30, 2008

I wonder what the author thinks about the attempted assasination of JP2, then, two years after that document was signed. Is it unconnected ?

Yes, it is not connected at all; the kgb always had interventionist mandates, protocols and directives regarding vatican influences ; and especially regarding the eastern european programmes of JPII's early papacy - think of what led to martial law in Poland - interception of church/trade union actions for reform by fifth columnists on the kremlin payroll - but moscow was not antagonistic to the reforming ideals - merely the speed and means of bringing it about....
JPII's papacy was the best thing to happen to the warsaw pact countries and they soon realised it - but it had to be regulated according to their agenda and timetable ; and not be contaminated by phenomena dangerous to their ideologies - things they could neither fully regulate or trust to stay within their remit of their long-term programme. Therefore His Holiness had to be watched and countered when opportune....

But the assassination attempt , contrary to popular belief and even the 'reasoned opinion' of many authors with access to the security services or ex-members of the KGB [e.g. Oleg Gordievsky] - it was NOT the soviets who actuated it or even planned it.
The real enemy is too difficult to go into detail here but if you require proof that it wasn't the KGB - think how Mehmet Ali Agca [a wanted criminal] managed to travel through NINE frontiers without interpol or the CIA or any other organization stopping him - think too of the assassination attempt's repercussions ; and why dozens of diplomats/ administrators [CIA operatives] east of the Iron curtain suddenly rushed for home [it seriously looks like the vatican was exacting retribution by giving them a deadline before their covers were blown]
But please don't be confused into thinking this was the actions of any western government ; this goes beyond borders to the economic and political global movers and shakers - those who had a few trillion wound up in eastern european heavy industry and sweatshops - these were the ones most at threat by JPII's policies - these were the ones who sought to punish His Holiness and make a statement to the Vatican, European reformers AND the kgb - to Butt out!! - quit messing with the status quo that made some western people super-rich by bleeding the east dry.
So the western intelligence, security and police services were ordered to turn a blind eye....

The KGB , MGB, NSKVD and even todays FSB etc were responsible for the decimation of tens of thousands of catholics and vatican operatives seeking to undermine the Stalinist agenda ; and were never anything but utterly antagonistic to us ; and they wrought chaos through their intra-vatican shenanigans during and after the council ; but regarding 13th May 1981 - for an ironic change ; the blood is not on their hands.