Hoc et illud, this and that 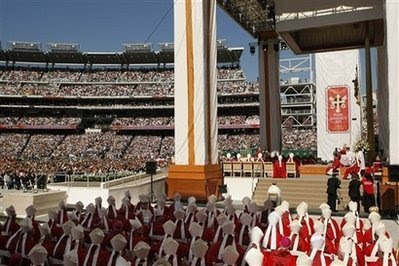 There is Mass at Yankee Stadium today, hundreds of priests concelebrating, thousands of laypeople. The Pope has expressed his doubts about such events, saying he did not think that this is what Christ intended.
The words of consecration begin "Hoc est..." not "Illud est...", "This is..." not "That is...". There is an intimacy between Christ and the elements, "he took bread into his holy and venerable hands", as the Roman Canon says. Is one really saying Mass if one can't see, let alone touch the elements?
Before the introduction of concelebration, there was hardly any theological discussion of it. There were mutterings that the Byzantines had always done it, that it had been done in the west at ordinations, but no-one had actually asked WHAT was being done. The parallel seems to be the consecration of the chrism, at the Chrism Mass in Holy Week, the bishop prays and the priests "associate" themselves with this action by holding out their hands, in the epiklesis gesture but the priest does not co-consecrate.
Are a thousand priests saying Mass in the Yankee Stadium doing the same as a thousand priests at their own altar, as the Code of Canon Law says a priest may offer Mass for a particular intention at these Masses, and take a stipend, it, at least makes this is the presumption, but canon lawyers ain't theologians!
Maybe the Ball Park Mass and todays might get the Petrine brain cells going on this matter.
at April 20, 2008

I think that when one compares the dignity of the Mass celebrated in St.Patrick's Cathedral,with those celebrated in football stadiums,racecourses or other such venues needed for those vast crowds,I think that these Masses for vast crowds should be abandoned and replaced with events similar to the audiences in St.Peter's Square.Whilst the Eucharist is at the heart of our lives there are other devotions that could more prayerfully be celebrated with vast crowds.

I think FFN is absolutely right.

A sports stadium is fine for a large gathering, such as the huge crowd of Catholic youth whom Pope John Paul II addressed at Murrayfield, Edinburgh, when he visited Britain in 1982.

The crowd went wild with enthusiasm. John Paul seemed to be in his element. He delivered a brilliant speech.

But there was no papal Mass.

It occurred to me then, and occurs to me now, that a sports stadium is not really a suitable venue for Holy Mass.

I would like to see an end to these open air liturgical extravaganzas.

Mind you, there was also the feeding of the five thousand (not counting women and children) as a precedent...

(not that I advocate such "Ball Park" Masses myself...)

I would prefer that the Pope have Masses at a church and then use Yankee Stadium and the like for a special address to the people or something like that.
Or open Yankee Stadium and broadcast the Mass on the Jumbotron - that way, there's a sense of "community" and a sense that you're participating, without the chance of sacrilege, etc.

In this day and age it reduces the Mass to the appearence of just another Evangelical prayer service.

I have always had some reservations about large concelebrated Masses and I think the Holy Father does also (not that he needs my agreement on this…!). It can be overdone, lose significance and be a distraction. I could see a small group of concelebrants around the altar on certain occasions, with all other clergy in choir dress and available to assist with distribution of Holy Communion. But having hundreds of concelebrants is a stretch - to me, anyway.

The most meaningful concelebration I participated in was many years ago when I was still in the active ministry. I was chaplain to a nursing home where there were two elderly priests who were both disabled from stokes. One couldn’t speak (he could just make some sounds that were unintelligible) and the other had limited use of his limbs. Neither had been able to celebrate Mass for a long time.

As this was soon after Vatican II, concelebrated Masses were still pretty rare events, but I suggested to them that they concelebrate with me. As this was pretty new to all of us, there was some hesitation. But one morning they did and it was a moving experience – for them and for me. Afterwards, the priest who couldn’t speak thanked me in his own way, tears streaming down his face. I felt that this was an appropriate use of concelebration.

There is absolutely nothing similar in the modern Byzantine rite like such stadium masses. Concelebration there is always limited to very few priests so that intimacy is not disturbed. Incidentally, concelebration is not impossible or forbidden in the traditional Latin rite (e.g. Denz. 3928, 1957),it seems to be simply out of normal routine use, perhaps to produce more masses: if two priests co-celebrate one mass, it is just one mass, if they celebrate two separate masses, it's TWO masses, i.e. two times more graceful fruits.
More generally, Byzantine rite, unlike Latin, much more widely uses public prayer services ('moleben': молебен). Several of them usually occur in any Russian Church every day, many for various special occasions (this also reflects the limitation of only one liturgy a priest may celebrate one day). In the Catholic Church we used to celebrate Holy Mass for almost all occasions, sometimes perhaps without thinking. A public thanksgiving/prayer service would be more appropriate for giant crowds. It would provide more than merely an address or lecture, it may be real prayer service with all spiritual fruits, but still without compromising the dignity of the Holy Sacrifice.