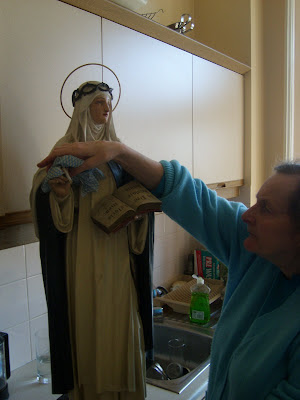 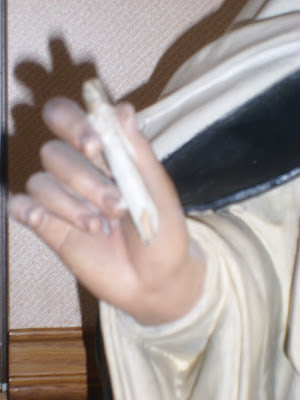 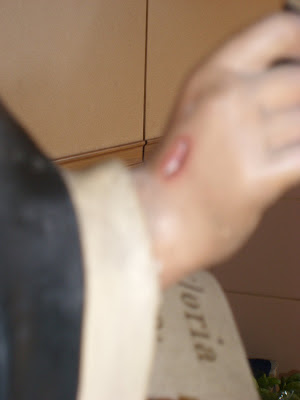 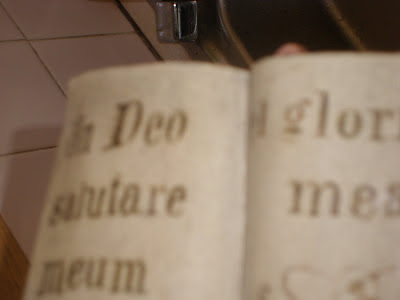 Like Orpheus descending into the underworld to find Euridice, like Christ in search of the Just, we descended into the depths of the Church and came back victorious, with a long discarded statue of Saint Catherine of Sienna.
She is rather pretty. She needs a new quill - a bit strange as she was illiterate. Her stigmata can be seen, she prayed for it to become invisible, a grace which was given her, as it caused admiratio.
She needs a bit of repainting.
Ann our sacristan is giving her a clean up before she is returned to the house of her bride groom.
The text on her book reads "In Deo salutare meum et gloria mea".
She was made in Germany at the turn of the 19th century.
at April 29, 2008

Beautiful - So many statues must be lying in cupboards it is lovely that you have brought this one out into the parish. Your sacristan has done a good job too.

Your posting prompted me to look up the life of St Catherine of Sienna. Are you sure the statue once had a quill in her hand? A frescoe painted by Andrea Vanni (c1332 - c 1414) shows the saint with a long stemmed lily in her hand. She has also been depicted with a rose representing a legend in her life.

In art I understand that the saints are usually depicted with something pertaining to their life so if St catherine was illiterate it does seem strange that she would be holding a quill pen. Just a thought and have just discovered her feast day is April 30th - tomorrow!

PS you may be interested, Father, in the BBC 4 programme last night 'The Art of Eternity'. It is on the BBC i player. there were magnificent examples of mosaics and icons from Ravenna, Constantinople and other Byzantine sites. I know you don't watch much TV so you may have missed it!

What a beautiful (and traditional!) statue of a great saint! I hope you post some photos of her in her final resting place when the repairs are done.

What I wouldn't give for a basement like that!

I found her with a candle in her hand, presumably to replace the quill or pen, a nib remains.
I am afraid we can't yet afford her repair so she is going into the Church as she is.

Maybe you could point her out to the parishioners and make an appeal for help restoring her.

Fr Blake, I believe that she is one of the saints who received infused knowledges from the holy Spirt! Yes, all of a sudden, she knew not only to read and write but Theology and beyond! I hope I am not mistaken here. Love your blog-- I have it in my googlereader since our oldest son lived in London as a Notre Dame student abroad.

A really interesting overview of the life of St Catherine of Sienna can be found here http://blog.siena.org/2007/04/st-catherine-of-siena.html

The quill can wait. She's beautiful even without it.

I rescued an older small statue of Our Lady of Grace from the store room of our church. The tip of her nose was chipped and I took it home to do repairs. That was 8years ago and the nose is still chipped and she lives on my prayer table in my office.

My pastor assured me it wasn't "stealing" since I told him where she is living now. Hope he's right:)