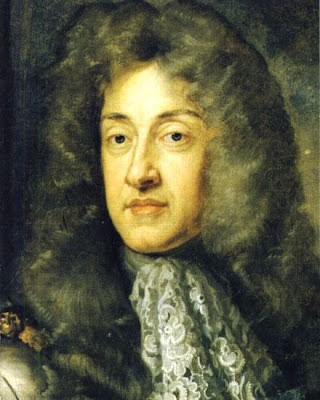 There is a lot about our last reigning Catholic King, James II on Roman Christendom, I was struck by this passage:

Our Blessed Saviour whipt people out of the Temple, but I never heard he commanded any should be forced into it; tis a particular grace and favour that God Almighty shews to any, who he enlightens so as to embrasse the true Religion, tis by gentleness, instruction, and good example, people are to be gained and not frightened into it, and I make no doubt if once Liberty of Conscience be well fixed, many conversions will ensue..."

James has had a pretty bad press, I remember as an Anglican schoolboy being marched off to chapel on 5th November to give thanks for the discovery of the Gunpowder Plot AND also for the invasion of England by William and Mary, James' daughter and usurper, which is referred to as the "Glorious Revolution".
at April 07, 2008

On another matter, thank you for your pledge of prayers; I am most grateful.

Most history written in the English language has a strong anti-catholic flavour, I remember been taught that the Spanish Armada was a unjustified act of aggression by Spain only as an adult have I learned that England had for a long time been involved in government sanctioned naval piracy against the Spanish and had also been giving assistance to the protestant rebels in the Low Countries which were at that time governed by Spain.

The biggest shame of it is that I went to a Catholic school :(

If the Gunpowder Plot had succeeded we would have had Charles I as King at the age of four instead of twenty-four.

One interesting take on it is that it is likely to have been a false flag operation. Guy Fawkes and his accomplices had succeeded in getting hold of virtually all the 36 barrels-full of gunpowder present in the Kingdom - no small achievement given that gunpowder was a state monopoly - and in wheeling it through London without anyone noticing.

Now for the Glorious Revolution. What's interesting about James II is that he proposed to introduce measures to ensure that slaves in the Caribbean were admitted to Christian instruction and baptism and allowed Sunday rest. He also wanted their marriages to be respected so that husbands and wives would not be separated if either alone was sold. He was deposed before he could put this into effect, over a century before Wilberforce.

When William and James' daughter Mary seized the throne they had to be crowned by the Bishop of London, as the Archbishop of Canterbury wouldn't do it. When Mary asked the Archbishop for his blessing for the Coronation he retorted that she should seek her father's first.

The one that drives me berserk is why they should append the adjective "glorious" to an event which definitively extinguished all judicial knowledge of the Law of God, while causing the Sovereign to swear at the Coronation to uphold it "to the utmost of your power".

The oldest son of King James I was Prince Henry who was made Prince of Wales and died at the age of 18 in 1612. Which was unfortunate as it made way for Charles.

I am praying for king james to be made a saint. I have been fascinated by him since my childhood. When i visit paris i always put flowers on his tomb at st germain.and something beautiful always happens immediately afterwards. I became a catholic 3 years ago and took jacoba as my confirmat ik on name.i count him as one of my patron saints. He could be patron saint of english people living abroad.particularly in france or holland and of catholic converts or people struggling with physical desires. I find his humanity very touching.also some humility like when he used to visit the paris benedictines in disguise and stood waiting in the rain and laughed when they didnt recognize him. God bless king james

I am praying for king james to be beatified. I have been fascinated by him since my childhood. Became catholic 3 years ago and took jacoba as my confirmation name. I am expat british living in holland. James could be patron saint of british living in france or holland.of exiles.catholic converts.and people struggling with physical desire.he was my inspiration to become catholic and i believe him to be a saint. When i am in paris i always go to st germain to put flowers on his tomb. Something beautiful always happens afterwards.