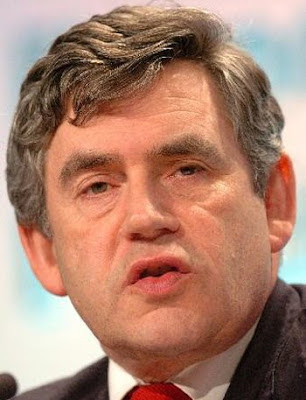 Guardian
Gordon Brown flew into the US last night just hours after Pope Benedict XVI arrived from the Vatican for his first visit.

Although Brown's three-day trip has been billed by Downing Street as one of the most important of his premiership, it is being swamped in the US by the coverage of the Pope's visit.

The pontiff has already had thousands of column inches in the US papers - and been on the front pages of the New York Times and Washington Post since last week, with long features inside - while Brown's visit has yet to warrant a mention in either publication.

British officials disclosed yesterday that they had been unaware of the Pope's plans to visit the US when a date for meeting George Bush was fixed. It was days before they discovered that it would coincide with a papal visit, but by then it was too late. An official said: "We knew early on that the visit clashed with the Pope. There was no suggestion of moving it."

The Pope is due to meet Bush at the White House this morning, an event to be attended by thousands, while Brown is scheduled to make a more subdued visit tomorrow.

The biggest diary clash will be on Friday, when Brown is to make a major speech on foreign policy, calling for the reshaping of international institutions such as the UN. But the prime minister's speech in Boston is in danger of being largely overlooked as the Pope, in an unfortunate piece of timing, is addressing the UN general assembly on the same day. An official tried to put a brave face on it yesterday, claiming publicity was not necessarily the most important criterion and that Brown's speech would be read by foreign policy specialists.
at April 16, 2008

Sounds like good planning, though it is probably best if the speech goes unread, it will only make the £ tumble further if it is publicised. The man is a complete fool. And his counsel, the appropriately named Ed Balls, who has directed economic policy for the past 11 years. Only don't blame him either because he is only regurgitating the economic theories picked up amongst the ivory towers of Oxford. Any street busker or Big Issue seller knows more than the clowns who teach our politicians and their advisors.

Gordon Brown? Who is he? What happened to Tony Blair? ;)

You would need to have a heart of stone not to laugh.

This gave me a chuckle. Can Gordon and his people get anything right? I've known about the Pope’s visit for months as have many Catholics, does Gordon not have any Catholics as his advisors?

Robert Mugabe hit the nail on the head when he said about Gordon Brown not counting for as much as a pinprick.

He is a great admirer of Margaret Thatcher who sowed the seed of our present problems by establishing that GREED was a virtue.

Nick, it sounds as if Mugabe has precisely the right term to describe Brown. No they can get almost nothing right and the other two parties are just as bad. Which leaves us all marooned in a narrow stretch of polluted water with no means of propulsion.

Which is no laughing matter.

Having him as the leader of our great Country is just nothing short of an embarassment.

His speech at the UN made me extremely nauseous.

And then when he was on the Breakfast TV show I had to run out of the room.

Henry is right about all our leaders & those in waiting,THEY ARE ALL USELESS. They are only in it for their own ends.

Can't educate the children,safely look after the sick,care for the aged or run a Car-Park