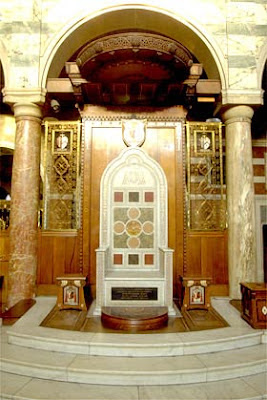 from the Telegraph
The candidates to succeed Cardinal Cormac Murphy O'Connor as Archbishop of Westminster have been whittled down to three.
Mandrake hears that the names on the official list - the terna - are Archbishop Vincent Nichols, Archbishop Peter Smith and Bishop Arthur Roche.
"It will disappoint those who were hoping for someone outside of the current crop of bishops," whispers my man at Archbishop's House.
"Benedict XVI is not, however, obliged to pick one of the names that Archbishop Faustino Munoz, the Papal Nuncio, submits to him so we will have to wait and see."
Traditionalists had hoped that the next archbishop would have been chosen, like Basil Hume, from outside the episcopacy of England and Wales and Mandrake understands that George Pell, the Australian cardinal, had been lobbying the Pope for such a move.
This led to speculation that either Abbot Hugh Gilbert, of Pluscarden Abbey in Scotland, or Fr Aidan Nichols, a Dominican Friar, were in the frame.
The Most Rev Nichols, the Archbishop of Birmingham, considered the favourite, is supported by Lord Alton, while the Rt Rev Roche, the Bishop of Leeds, is backed by John Gummer, the Catholic convert MP.
The Most Rev Smith, the Archbishop of Cardiff, won admirers with his lobbying of parliament over legislation on euthanasia and the Human Fertilisation and Embryology Bill.
Cardinal Murphy O'Connor is expected to stand down early next year.
h/t Muniment Room
at April 26, 2008

If this story is true then the magic circle has proved to be more secure than a nuclear bunker!

We'll know where to head if World War III breaks out.

The same Archbishop Peter Smith who Imprimatured a dodgy text book for schools written by ex-nun Claire Richards, which denied Original Sin among other things. Please God NO!!!

Thankfully Our Pope knows Archbishop Smith well, seeing as it was He who, as Cardinal Ratzinger, had to force the then Bishop Smith to remove his imprimatur!

He was only a bishop when this happened - didn't stop him getting Cardiff.

Damian's blogging has achieved very little, it would appear.

B16 will have to make compromises. The key appointment is what to do with Ranjith? If he gets liturgy, Clare Richards can get Westminster for all I care.