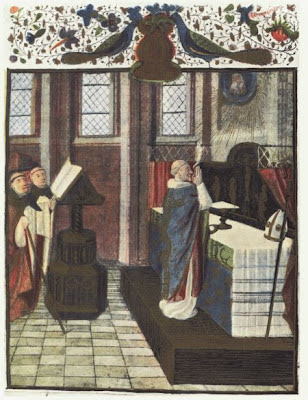 A quote from Martin Mosebach, The Heresy of Formlessness, Ignatius Press 2003 found here

Perhaps the greatest damage done by Pope Paul VI's reform of the Mass (and by the ongoing process that has outstripped it), the greatest spiritual deficit, is this: we are now positively obliged to talk about the liturgy. Even those who want to preserve the liturgy or pray in the spirit of the liturgy, and even those who make great sacrifices to remain faithful to it - all have lost something priceless, namely, the innocence that accepts it as something God-given, something that comes down to man as gift from heaven.

Those of us who are defenders of the great and sacred liturgy, the classical Roman liturgy, have all become - whether in a small way or in a big way - liturgical experts. In order to counter the arguments of the reform, which was padded with technical, archæological, and historical scholarship, we had to delve into questions of worship and liturgy - something that is utterly foreign to the religious man. We have let ourselves be led into a kind of scholastic and juridical way of considering the liturgy. What is absolutely indispensable for genuine liturgy? When are the celebrant's whims tolerable, and when do they become unacceptable? We have got used to accepting liturgy on the basis of the minimum requirements, whereas the criteria ought to be maximal. And finally, we have started to evaluate liturgy - a monstrous act!
We sit in the pews and ask ourselves, was that Holy Mass, or wasn't it? I go to church to see God and come away like a theatre critic.

Having clicked onto the bit about evaluating liturgy I found a fascinating site called the Mystery Worshiper. This is most entertaining, and some contain humourous comments (re Russian Orthodox church London). There is also comment regarding the smallest church in the world (which I thought would be Lullington in Sussex) but which turned out to be in the US. Under 'How full was the congregation' the reply was 'completely' as it contained only 4 chairs!

I clicked onto St Peter's Anglican church in Brighton and was amused to see it was described as being 5 minutes walk from the sea front! The Mystery Worshiper must wear 7 league boots!

After having followed the comments on several churches of interest, I was surprised to see that the visitors (who seemed to be Anglican) all put great importance on the welcome (or not) which they received on entering. Also whether they were offered coffee afterwards.

By the time I had read several of these reports, I found I had forgotten the subject matter of the original posting but I can see now what the writer was trying to say. During the last few years I have attended Mass in many different churches both in England and in France and because there are so many variations today, it is often difficult not to be critical. 'Only one candle on the altar here': 'Why did the Priest do that?' etc etc

With so many differences today, how can we fail to compare Mass experienced elsewhere with Mass celebrated in whichever church we normally attend? Yes I know that Mass is the same wherever it is celebrated and whether with one candle or six on the altar but it is not easy to stop being critical as the writer explained.

What Mosebach says gives much food for thought. In the main, he is right.

I refrain from going to my own parish for Sunday Mass precisely because of the theatre which goes on there. I won't bore you with it but I am not the only one who so feels. Others go there precisely because it is a theatrical entertainment complete with obligatory jokes before the final prayer and blessing. We have a visiting priest from India here for a year and he has picked up and fallen in with these faults. What an example to take back to India!
There are times when I have to go there because I have been rostered on as Acolyte. I am aware that my opinions are known to several regulars of that congregation. I am also known as one who will be absent for the Easter Triduum because I prefer to have the traditional Latin and join in with the singing, which I do. Thus I avoid the donkey and dressing up as Roman sodiers etc..

I stopped attending Mass at my parish after a change of hands. The new Pastor has instituted a sign of peace and introduction prior to to the entrance hymn. Has changed the words of response of the "Prayers of Petion" from "Lord hear our prayer" to the gender neutral "Loving God hear our prayer" has the extra-ordinary minister of the Eucharist elevating the host with Him in the final part of the consecration. The musical liturgy has become preformance instead of liturgy. The homilies that are about any but the reading of the day and finaly at the end of Mass we are to raise our hands if it is our birthday so that every can sing happy birthday. This parish was built in 1907 it is an architectual masterpiece, the Mass is valid, but does not stir my soul.

I know attend a modern looking Parish with a GIRM faithful Mass. My soul is at peace, as it should be.

I have been thinking a lot about this particular post and the fact that we have become almost like theatre critics with regard to where we attend Mass.

Peterhwright comments that perhaps we are not in the wrong to do this and I sympathise with john and joseph who have found other parishes to 'stir their soul.' I too have done this and now find that instead of attending Mass as a duty, I go because I really want to which is surely as it should be. Did not someone say once that Mass was the most beautiful thing this side of Heaven?

The other day I decided to write down the differences between Mass celebrated in two different churches in my area. I had no difficulty in coming up with 20 of which the majority were what I would term major. And both are Novus Ordo.

The lack of standardisation (if I may use that word ) has lead many of us to become 'parish shoppers' and like joseph I now feel at peace during a particularly difficult period of my life.

Fr. Ray has a knack of posting items which make you stop and think.

I have to agree with all the above comments. Undoubtedly, the correct thing to do where necessary is to seek out a church where the Mass is celebrated reverently, without gimmicks and ad libs, and in conformity to the GIRM (Fr. Z's "do the red, say the black").

This inevitably means "shopping around" as Pelerin point out, but it's not quite the same thing as seeking out your favourite style of theatrical production.

This analogy could be said to apply to people interested only in, or primarily in, externals, people who prefer the Roman chasuble to the Gothic, who prefer polyphony to plainchant, but the analogy breaks down when it includes Catholics who for the right reasons prefer, say, Latin hymns to kumbaya.

I am speaking of Catholics with a true "sensus fidei", like the above commenters, who are able, for the best reasons, to see for themselves when things are going wrong. I was particularly taken with John's comment that he avoids certain liturgies precisely because of their theatricality.

If there were such a thing, as a Catholic "Good Church Guide", (a) I don't think I would care to read it, and (b) I hope it would be compiled on the basis of fidelity to the Catholic faith and adherence to the Roman Missal rather than as a sort of tourist guide to the Best Places To Go. I would leave that to websites like Mystery Worshipper.

Theatre critics ? No. I don't think we should call ourselves this at all.

Orthodox Catholics are called quite enough names already by modernists, without us giving them more bullets to fire !

This analogy could be said to apply to people interested only in, or primarily in, externals, people who prefer the Roman chasuble to the Gothic, who prefer polyphony to plainchant, but the analogy breaks down when it includes Catholics who for the right reasons prefer, say, Latin hymns to kumbaya.

Exactly! Dr. Wright hits the nail on the head again!

What most "reform of the reformers" don't seem to understand that the traditionalist criticism of the new rite is not based on mere externals but on the actual rite itself - the words, translations, gestures, rubrics, etc.

And this is probably why many of "reform of the reformers" will not engage in a debate on liturgy on the lines of Cardinal Ottaviani's criticism of the new mass. They know that even a dressed up Novus Ordo in Latin, ad orientem, Roman chasubles et al. still pales in comparison to the traditional mass.

I must admit that I read Mosebach as being even more upset than you with the theatre critic analogy: he exudes the outrage of somebody forced to apply secular values to what should be an unsecularisable spiritual event.

At what point in the history of salvation, AD33 - AD2008 could Mosebach's paragraph have been written anywhere in the Western Church? (So not Pistoia, or Austria under the Emperor Francis.)