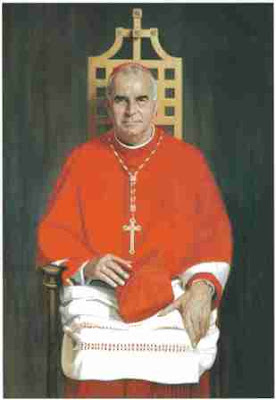 In England myths about stem cell research seem to be endemic amongst most people, even Catholics, most are unsure of why the Church teaches life begins with conception, most are unable to understand the difference between ethical and unethical stem cells, most assume the Church is against all forms of research.
I think this is not the case north of the border, where the senior bishops seem much more media savvy, and much better at communication with the ordinary man and women in thye pew.

counterparts who consistently hit the headlines. Cardinal O'Brien has done it again by asking Alex Salmond to make Scotland the leader in ethical stem cells.
By doing this he has said so many things, chief amongst them that there are ethical and unethical stem cells and also that the Church is not against stem cell research. The other thing he is also teaching and gathering both Catholics and like minded individuals to the pro-life standard.
The English "behind closed doors" strategy" just leaves most people confused, myths continue, their silence seems to indicate the battle is ended, the fight is over. When the majority of MPs seem less well informed than the average London cabby, we really do need our bishops to do a little better than they have been doing over the last few weeks.

Total Catholic
Cardinal Keith O’Brien has issued a call for Scotland to lead the world in stem-cell research that does not use human embryos.

Scotland on Sunday reported how the cardinal had written to SNP leader and First Minister Alex Salmond calling on him to set up a national cord blood bank, where samples from the 50,000 babies born in Scotland every year could be kept.

Cardinal O’Brien said he would like all hospitals in Scotland to start harvesting the blood contained in babies’ umbilical cords, which he said may hold the key to a range of life-saving treatments.

The newspaper suggested that Cardinal O’Brien believes Scotland should now lead the world and take the ethical step of ditching techniques that use embryos in favour of the ‘cord blood’ research.

The cardinal’s latest move came after a heated debate followed his Easter Sunday sermon when he launched an attack on the government and urged Gordon Brown to rethink “monstrous” plans to allow the creation of hybrid human-animal embryos.

Since then, researchers at Newcastle University have announced that they have already successfully created the so-called “admixed” embryos, angering pro-life MPs who said their actions had undermined Parliament, which was currently assessing the Human Fertilisation and Embryology (HFE) Bill.

The Christian Legal Centre has claimed that the Human Fertilisation and Embryology Authority acted beyond its powers in granting scientists permission to create the hybrid
embryos and is taking legal action.

Cardinal O’Brien called such hybrid embryos “monstrous Frankenstein” research and also called on the Prime Minister to allow Labour MPs a free vote on the issue at Westminster.

The Prime Minister has promised his MPs a free vote on three aspects of the Bill after he heeded warnings that Catholic Labour cabinet members including Ruth Kelly and Paul Murphy might vote against the government.

The cardinal said that the use of embryos, who are very young human beings, in the research is wrong, despite suggestions in the scientific world that illnesses such as Parkinson’s and Alzheimer’s could be cured by implanting stem-cells into the affected areas.

His views on the ethical collection of stem cells from cord blood are seen as an acceptable way forward for stem-cell research as it avoids the unethical experimentation on embryos.

Treatments resulting from its collection continue to be discovered by scientists across the world.

Cardinal O'Brien is saying what needs to be said.

He seems to have travelled a long way from his earlier, less than wholly satisfactory views on conception and contraception.

This seems a genuine change, and perhaps this is why he so clearly understands the issues involved in stem cell research.

He certainly speaks, knowledgeably, convincingly and, I would say, authoritatively.

I would like to hear more bishops speak out on the subject.

Whilst this is a nice picture of Archbishop Conti, why is it illustrating a story about Cardinal O'Brien?

Interesting stuff. When O'Brien was made Cardinal everyone assumed that he would be terrible.

The photo you have up by the way is of Mario Conti rather than Keith O'Brien.

Stephen, my foolishness! I've replaced him.

"I am sure that Cardinal Murphy O'Connor and our English bishops are working hard behind the scenes on the stem cell debate but" ...

It would save time if we had a macro on the keyboard for this: CTRL + SHIFT + DOWN, perhaps.

Would you care to enlighten the rest of us watching as to the source of your certainty?