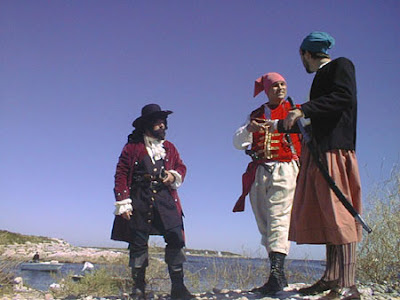 Those pirates, they might have looted, murdered and raped, but at least they were reverent...
found this on The Way of the Fathers.

.... a French missionary, Fr. Labat, who was captured by pirates and later wrote a memoir about it. It seems that the pirate Captain Daniels had an interesting way of enforcing reverence during Mass:
“When one of his men became offensive during the Elevation and swore, Daniels shot this crew member through the head and made an oath that to any other “who showed disrespect to the ‘Sainte Sacrifice,’ he would do the same too.’”

It is from a thesis on pirates and religious practice.
Posted by Fr Ray Blake

Captain Daniels was more in line with the Saints than you might at first realise Father.

"A Christian should argue with a blasphemer only by running his sword through his bowels as far as it will go." St. Louis, King of France"

"When a person blasphemes, his mouth should instantly be shut. Strike him in the mouth! Crush it, so that he cannot speak!" St. John Chrysostom

The last place you want to anger the Almighty is at sea.

Q - 'Why are Pirates mean and horrible?'

A - 'Because they AARRRRRGHHHHHH!' (with a West Country accent)

I wish I had had a small pistol at Mass this morning.