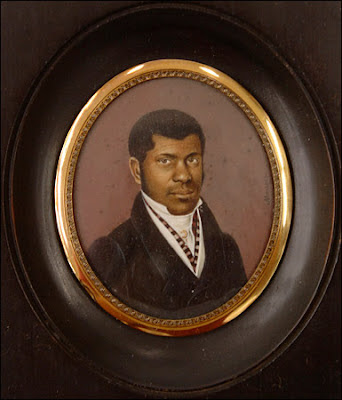 One of the people who the Holy Father spoke about during the youth rally at St Joseph's Seminary, Yonkers was Pierre Toussaint pictured here with his wife. 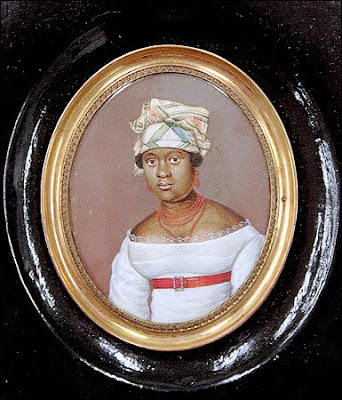 Venerable Pierre Toussaint (1766 – June 30, 1853) was born a slave in Haïti. His master taught him to read and write and he came to New York from Haiti in 1787. In New York, he became an apprentice to one of the city's leading hairdressers.

Pierre Toussaint quickly became a fashionable hairdresser, apart from his skill he listened to and advised his clients, helping them to deepen their own spiritual lives.
He was freed from slavery when his owner died in 1807 but continued supporting his owners wife until her death. He fell in love with Juliette Noel, and purchased her freedom when she was only fifteen years old. After their eventual marriage they set out to help those in need in New York City. They opened their home as a shelter for orphans, a credit bureau, an employment agency and refuge for priests and poverty stricken travelers. Toussaint also funded money to build a new Roman Catholic church in New York, which became Old St. Patrick's Cathedral on Mulberry Street. After the death of his sister Rosalie, he and his wife adopted her daughter Euphemia and raised her as their own.

As Toussaint aged, he continued his charity. His wife, Juliette died in 1851. Pierre Toussaint died two years later on June 30, 1853, at the age of eighty-seven. He was buried alongside his wife and daughter, Euphemia in Old St. Patrick's on Mott Street. In 1941, his grave was discovered by the Rev. Charles McTague. In 1990, John Cardinal O'Connor, then Archbishop of New York had Toussaint exhumed and reinterred in the crypt below the altar at St Patrick's Cathedral on Fifth Avenue. Because of Toussaint's charity and piety, he was strongly supported for sainthood by O'Connor.

In 1996 Toussaint was declared Venerable by Pope John Paul II, the second step toward sainthood
at April 28, 2008

You have such interesting posts Fr..

He must have been a wonderful man. I particularly like that he supported the wife of his former owner until her death - true charity.

I've actually seen the actual miniatures pictured at the NY Historical Society (which own them), there was a third of Toussaint's niece/adopted daughter, Euphemia (she died of TB in her teens but hundreds of the weekly letters she wrote to her uncle - in perfect French and English - are preserved by the NY Public Library. When you think of how dangerous it was to be a public Catholic, a black man and a rich Catholic black man (those pictures cost more than some families made in a year) it makes Toussaint all the more amazing - and he willingly remained in slavery so he could serve Madame Berard (his "owner's" fragile widow) until she died - and he supported her. A great holy man.