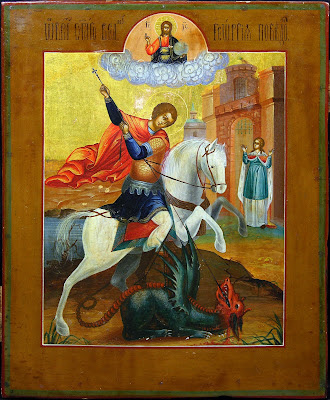 There are two distinct legends about Great George, the first, the soldier martyr slain for the faith, there is that marvellous altarpiece where St George suffers every possible torture or attempt to slay him until he finally succumbs.
The second legend he appears from nowhere, fights against a dragon to save a virgin, having defeated the dragon, the virgin leads him, now tamed into the city.

I love saints like St George, whose true story is lost in myth.
In both stories George becomes a Christian "everyman". The first legend reminds us that despite every attempt to overcome him by God's grace George endures and survives all, and even in death is victorious.
The second story draws on apocalyptic imagery, the dragon is the symbol of evil, the power of sin, but here it is to be contrasted with the pure virgin. I am reminded of St Athanasius' struggle for twenty years in the tomb against demons. In all of us there is the pure virgin and the dragon.
George, here takes on the attributes of St Michael (Michael means "Who is like God"), in his struggle he overcomes evil which then becomes subject to purity.

The battle between George and the dragon therefore can be seen as the battle which takes place in the hearts of all believers, the struggle to tame our rebellious wayward nature and make it subject to the Life of Grace.
at April 23, 2008

What a splendid entry. I too hold to the feasts of valiant soldier saints like today's glorious martyr. Thank you, Father. At Vultus Christi I posted a painting of Saint Antony of the Desert, that other "Christian everyman", together with Saint George and Our Lady.

The Poles celebrate their 'Imieniny' or Name Day in as big a fashion as we celebrate birthdays in this country. Having been born in England of Polish parents I celebrate BOTH!

So, Happy Imieniny to ALL Georges, wherever you are today!

On Fr Z's site he has the news that the Vatican has approved the beatification later this year of Cardinal Newman. No doubt the timing of the announcement for today, St George's day was deliberate.

Pelerin,
I have put a post up on this while you were commenting.