What were you doing? 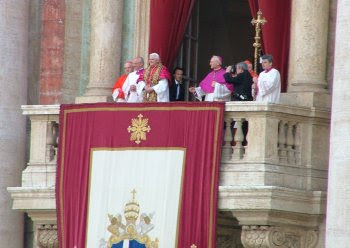 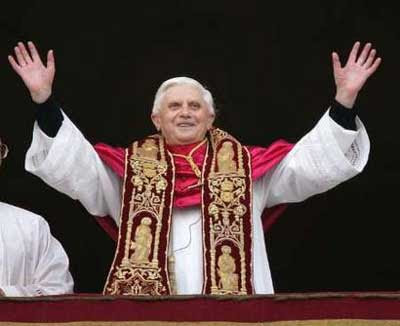 Yesterday was the third anniversary of the election of Pope Benedict.
I heard on the radio white smoke was seen.
I turned on the television, I expected a South American. When the name was announced I couldn't help but shout for joy, I don't think I had ever wept for joy before. I rang one or two friends, then rang the church bells, put a large papal flag out the presbytery window, sang the Te Deum. Then I went out and bought champagne, as much as I could carry.
I had arranged to say Mass, if a new Pope was elected at 7pm after the election, so for the thirty or so people who turned up I offered thge Holy Sacrifice, sang "God bless our Pope", and we drank champagne afterwards.
Afterwards I couldn't stop praying, "thank you, Lord", I still say that.
at April 20, 2008

I was reading an article in the Catholic Herald, with one eye on the television set, waiting to hear the announcement "Habemus papam".

Didn't the crowd in the piazza go wild with delight when they heard the name "dominum Josef sanctae Romanae ecclesiae Cardinalem Ratzinger" ?

I'd been at work and stepped out for lunch. I'd come into the sandwich place I normally frequented and noticed all the hoopla on the TV and said "oh, did they elect someone already" and the counterman said "yes, it just happened, some German guy..." And I immediately knew it was Ratzinger. So I got to watch the new pope address the crowd while I was having my lunch.
I can also remember what I was doing when JPII was elected. I'd had a little part time job just after college picking up checks around the county. I was listening to the radio while in the car and can still remember the incredulity of the radio announcer who'd read off the teletype that "he meant know disrespect but apparently a new pope has been elected who was Polish and he [the announcer] didn't know how to pronounce the name" and then he gave it his best shot. By dumb luck I was just about done for the day and only had one more pickup to make. I was quite close to a small church where I knew the pastor out there (he'd previously been assigned to my parish) so I gave a quick phone call, and was invited over to watch JPII address the crowd for the first time. So I think I was pretty lucky twice in a row being about to see the two of them give their first address to the crowds in St. Peter's square. I was born during Pius XII's reign, but I don't remember him, but do remember John XXIII and of course his successor, Paul VI - who was the first and only pope I actually laid eyes on. My family went to Rome mid-Feb of '73 and there was an "event" of some sort in St. Peter's. The pope was carried in on the chair, thank goodness, because otherwise I wouldn't have seen squat. as it was the Mass was hard to follow as we couldn't see ZIP, the Italians around us practically standing on each other's shoulders even then.

I rember that day like it was yesterday. As I watched the anouncement and I heard the word Joseph I was jumping up and down in pure delight and it was several minutes before I calmed down.

One of the happiest days for the Church,God bless our Pope.

I was at a Parents' Evening. Found out when an excited pupil came and told us. They had rigged a TV up in the staff room. Went home and watched as much TV coverage as possible, including that Newsnight item - still a favourite.

Next morning went to a local Church where a family had been saying the Rosary every morning during the Conclave.

They provided a very welcome post rosary breakfast, then off to work. Bought a paper, cut the picture of the Holy Father out and stuck it on my white board.

Since I am on the other side of world, I was about to go to bed. And I woke my sister up to tell her the news. But when I saw the new Pope, I was astonished and a little disappointed. I had prayed for a Pope who would be a good Shepherd, but when I saw him, I thought, "Next time, I'll add more specs to my prayer - not so old, Lord!!!" But what do you know, God granted my prayer after all. Pope Benedict XVI is a wonderful shepherd to our Church.

Freaking out, screaming "Habemus Papam!" to the non-English speaking Poles working on the house next door.
They managed to shrug their shoulders to convey the message, "Who is it?"
I said, "I DON'T KNOW! THEY HAVEN'T SAID YET! I'LL BE BACK!"
and I ran back over to the TV in my house, and then ran back to them a few minutes later, shrieking, "Joseph Ratzinger! Joseph Ratzinger!"

The neighbors must have thought I'd lost my mind.

I think a lot of people "feared the worst" when Cardinal Ratzinger was elected, but as Pope Benedict XVI he surprised, and delighted, many.

I remember the media didn't know quite what to make of his first encyclical Deus caritas est. Not at all what they had been expecting from Pope Ratzinger.

I celebrated his election with a premier grand cru (extra sec), not forgetting to raise a glass to the memory of John Paul II.

I very much enjoyed Fr. Ray's description of his celebrations.

As my old grandmother used to say, it's a poor heart that never rejoices.

I was listening on the radio and cried. Got home in time to see him walk onto the balcony to greet the crowds. We all knelt down and prayed for him. The pure joy was unforgettable, because I didn`t think they`d go for him. But I have to say, it was quickly grounded by the realization that there would be an unpleasant backlash, so the celebrations were fairly short, and I got on with bracing myself for that and trying to redouble prayer for him. I can`t beleive we have been so blessed to have him. We need to pray that God keeps him for another twenty years.

one of our brethren was ringingthe chapel bell so quickly that we thought it was the fire alarm!

I had not long returned from work when the news broke. I must admit to a tear or two. It was a great day for the Church and I thank God for his choice.
God bless the Holy Father.

I remember reading the news coverage of Deus Caritas Est and laughing out loud when they all said more or less the same thing, "But but but... we thought he was a big jerk and a Nazi and everything...what's with all this love stuff"?

Oh, and there is a drink to commemorate the occasion. You can call it various things, "Panzer Pabst", "The Rottweiler", the Hardliner" or Ratzi's Revenge.

Take a pint of Bavarian beer and a shotglass of Benedictine Liqueur. Sink the shotglass into the beer.

Yell, "Viva Papa" and chug it back.