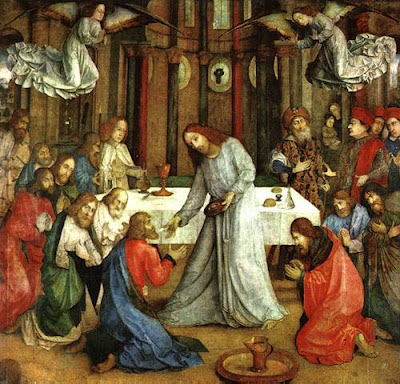 CWNews.com) - The American magazine Catholic Response has published an English translation of a provocative article, originally published in the official Vatican newspaper, calling for an end to the practice of receiving Communion in the hand.
The article by Bishop Athanasius Schneider of Karaganda, Kazakhstan, originally printed in L'Osservatore Romano, examines the historical record of Catholic practice, concluding that the early Church quickly developed the practice in which lay people Communion on the tongue while kneeling. Only ordained ministers were allowed to touch the consecrated Host with their hands.
By the 6th century, Bishop Schneider writes, the Church had formed a consensus that Communion should be received on the tongue, of reverence for the Eucharistic Lord. Pope Gregory the Great chastised priests who resisted that consensus, and it was become an "almost universal practice" in the early Church, the author says.
Kneeling to receive Communion was also a pattern established early in Church history, Bishop Schneider reports. That posture, too, was seen as a means of expressing reverence for Jesus in the Eucharist, and "the most typical gesture of adoration is the biblical one of kneeling."
By administering Communion on the tongue, priests were able to foster greater devotion to the Eucharist; Bishop Schneider remarks that that form is "an impressive sign of the profession of faith the in the Real Presence."
He adds the argument that this form of distributing Communion can prevent accidents. The author cites St. Cyril of Jerusalem, who exhorted priests to use extra caution "so that no even a crumb of the Lord's Body could fall to the ground."
The article published in L'Osservatore Romano, and now translated in Catholic Response, summarizes the more complete argument that Bishop Schneider put forward in his book, Dominus Est. That book, released in Italy earlier this year, drew special notice for two reasons. It was published by the official Vatican press, and a preface was contributed by Archbishop Macolm Ranjith, the secretary of the Congregation for Divine Worship, who said it was "high time to review" the policy of allowing laymen to receive Communion in the hand.
at April 23, 2008

...and yet at the present most Catholics in the UK receive Communion in the hand, standing up, and with no bow or genuflection before receiving.

I think unless the Bishops start to encourage parishioners to receiving Communion on the tongue that practice will not return to Britain any time soon. And, to be honest, I can't see the present run of Bishops doing that.

I know of a priest in Ayrshire who has told his Eucharistic Ministers that to receive on the tongue is "wrong" and that the proper way is to receive in the hand. In the RCIA I was told by the priest that to kneel was "disobedient". He would also refuse to give Communion to anyone kneeling. Sigh.

On this subject as with many others concerning the litugy nowadays, there is often a strong dose of 'special pleading' at work. For instance one should also look at the questions concerning 'communion under both kinds' (history and theological developments) in the East as well as the West of the Church. What Msgr. Ranjith refers to is a development in the Roman Rite with unleavened hosts, which was a development around the time of Charlemagne -- and much later in many places. One has to look carefully at the documentation and the historical context when one is making assertions concerning 'practices', and certainly when one wants to draw general conclusions.

Not just on the tongue but note also KNEELING.

david, kneel any way, have some courage for crying out loud.

And I suppose if the pastafazzo slingers attached to the Vatican decide that all women must have their heads covered at Mass because it was "ancient practice" I'm supposed to prostrate myself and say "yes sir." Feh. Push someone else to the back of the bus, I'm not going.

If they really wanted to have reverence for the Eucharist, then they should outlaw those freakin' frisbee altar breads. But oh, no, one of their confreres might be offended. So who do they pick on? Why 100% of the laity. Not just the people who are "casual" about reception either on the tongue or in the hand -- no, 100% of us have to be scolded.

I think people who tell other people that to receive in the hand only are wrong, but I also think it's equally a pain in the rear to insist the laity must receive on the tongue.

Following this post I have listened again to Fr Z's Podcazt on Communion on the Tongue. I have a deep desire to return to receiving in this manner but each time feel too nervous to do so, afraid that 'something would go wrong.'

Fr z says that we should approach Holy Communion with 'fear and trembling' which I have done but for the reason stated above. Deciding to receive in the hand I can concentrate on the Mass without worry but regret the missed opportunity.

For the first few years before the changes strangely receiving on the tongue never caused me any problem until one occasion, which I remember to this day. My parish priest at the time suggested I change to receiving in the hand and I have done so ever since.

Father, what would you advise someone who wishes to receive on the tongue but who would probably spend the first part of the Mass worrying about it?

Incidentally I had no problem when I attended three TLMs last year. Perhaps that was because I knew I would not have to say Amen beforehand - somehow saying Amen makes me forget to open my mouth wide enough.

Pelerin,
Do what you can do with devotion. That's the most important thing.

I receive on the tongue in the ordinary form, out of about 150 people I think only me and one old lady do this.

Pray to God for courage and then do it, you will feel so much better believe me.

If your feeling really brave you could even kneel, the Priest cannot lawfully refuse you communion for this, Rome released a document saying as much though I forget what it is called.

david, kneel any way, have some courage for crying out loud.

I left the parish where I did my RCIA and now kneel and receive on the tongue.

I'm pleased for you however I cannot hlep but feel that it sad also, you could have done much good as a sign of contradiction in your old parish.

Pelerin, I felt exactly the same way as you. I seemed to get my Amens and my opening my mouth all in a muddle. But l have finally done it. I feel terribly self conscious still because l am still convinced l'm not doing it right but being self conscious is strangely humbling. If you are at St Mary Magdalen's then come along to a weekday mass and try to communicate in the mouth there. Somehow that feels easier than trying to do it on a Sunday. It is really hard but l guess taking Communion should be.

It's matter of humility to receive on the tongue.

The document that Rome released on that was called Redemptionis Sacamentum

I have a priest that agrees with me that Communion in the Hand should be banished.

Whenever I go to the OF, I always kneel to receive Communion and on the tongue. (and run around to get in the priest line)