Russian priests urged to get guns 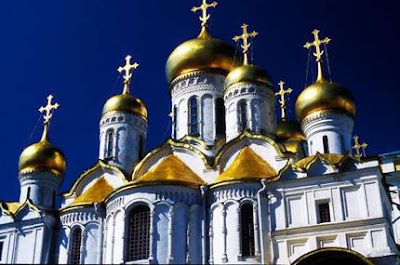 Russia Today
Police in at least one Russian region are advising priests to buy guns to protect themselves and churches from thieves in the area. The suggestion comes after icons worth thousands of dollars were stolen from churches.

During the latest raid in the Kostroma region, a gang of ten men believed to be organised criminals, blocked the nearby bridge, cut the electricity supply and phone lines and poisoned a guard dog before storming the church.

But what they hadn’t expected were the powers of a particularly brave priest, who’s lucky to be alive after being shot at when he confronted the mob.

The men though fled with eight religious icons worth about $US 300,000.

Larisa Barsukova from Kostroma police says the remoteness of churches is the main problem.

“Some churches are very far away in the countryside and it’s technically impossible to set up any security system. Several times the alarm hasn’t worked and there are no guards,” she explained.

Nevertheless most priests dismiss the arming idea as absurd.

“According to our religion, if a priest kills a man, he will be defrocked, because we cannot be criminals. So priests might buy a gun but they won’t be able to use it,” says Father Dmitry Igumin.

Father Dmitry relies on God a 24-hour surveillance system to keep his church and congregation safe - a choice favoured by the majority.

And while church officials admit there’s no easy solution to the crime wave, they say the answer must come from the state
Posted by Fr Ray Blake

I'm not sure about guns to protect ourselves from theives,but possibly from certain kinds of liturgists

This is what ushers are for.

Protection of property from thieves, and violent thieves at that, is a growing problem in many countries.

Of course it's the duty of the police to protect people and property.

But this should not include advising priests to shoot and possibly kill people.

It's one thing for a householder to arm himself with a shotgun (where the law allows,) in defence of his home and his family.

But I really don't think priests can adopt quite the same "take that, you son-of-a-bitch" mentality.

By all means let parishioners organise a constant watch over their church as long as they are not putting themselves in mortal danger.

But the onus rests on the police.
After all, if gangs of thieves can reach distant churches, then so can the police.

I rest my case.

Maybe Barak Obama knew about this when he commented that people in small town America turned to guns and religion!

My goodness the Russian Church and people survived the genocide and slaughter and persecution of the revolution, Lenin, Stalin and the communist band-wagon for nearly 100 years. It will most definitely survive the idiot, criminal antics of a few villains armed or not. We must remember the Church is so much more than just the sum total of its buildings and art treasures.

We should pray for our Catholic and Orthodox Russian Brothers and Sisters in Christ. St Michael intercede for us.

The parishioners should organise a constant watch over their church even if they are putting themselves in mortal danger, I can think of few more worthwhile ways to die than in the defence of Our Father's house.

Not that it would come to that, the criminals want to make easy money they don't want to die for it, you can't spend it when you’re dead after all.

I'm willing to wager the police don't even defend your parish church I know they haven’t been any police on guard duty at any of the church's I have been to in the UK.

I commend the Russian police for their honesty and also for allowing the people the freedom to protect their church, something we don't have in the UK.