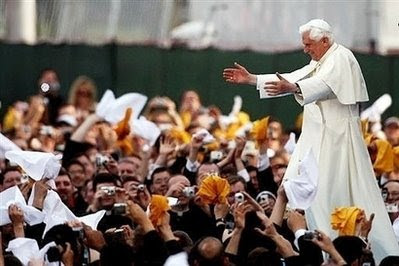 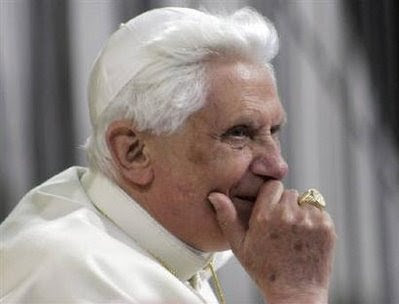 Here is the address of the Holy Father at Saint Joseph Seminary Rally with Seminarians and Young People, again very worthwhile reading. The Pope seemed refreshed and invigorated by this event.
here is an extract:

Have you noticed how often the call for freedom is made without ever referring to the truth of the human person? Some today argue that respect for freedom of the individual makes it wrong to seek truth, including the truth about what is good. In some circles to speak of truth is seen as controversial or divisive, and consequently best kept in the private sphere. And in truth's place or better said its absence an idea has spread which, in giving value to everything indiscriminately, claims to assure freedom and to liberate conscience. This we call relativism. But what purpose has a freedom which, in disregarding truth, pursues what is false or wrong? How many young people have been offered a hand which in the name of freedom or experience has led them to addiction, to moral or intellectual confusion, to hurt, to a loss of self-respect, even to despair and so tragically and sadly to the taking of their own life? Dear friends, truth is not an imposition. Nor is it simply a set of rules. It is a discovery of the One who never fails us; the One whom we can always trust. In seeking truth we come to live by belief because ultimately truth is a person: Jesus Christ. That is why authentic freedom is not an opting out. It is an opting in; nothing less than letting go of self and allowing oneself to be drawn into Christ's very being for others.
...
Sometimes we are looked upon as people who speak only of prohibitions. Nothing could be further from the truth! Authentic Christian discipleship is marked by a sense of wonder. We stand before the God we know and love as a friend, the vastness of his creation, and the beauty of our Christian faith.
...
Friends, again I ask you, what about today? What are you seeking? What is God whispering to you? The hope which never disappoints is Jesus Christ.
from
Rorate Caeli

Being a misanthrope, this singer really added an unpleasant note, singing the Schubert "Ave Maria", not the most appropriate liturgical music but apparently "she insisted". Unable to sing in tune, she is obviously unable to read music either!
What is "American Idol"? 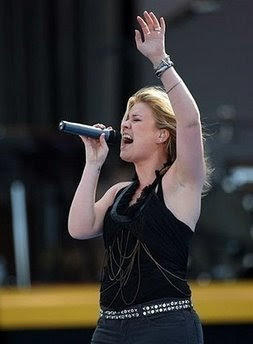 Nice events. I got to watch a bit with a friend of mine who'd been in the seminary there in the early to mid 60s. (He left to get married before the diaconate.) He said although the chapel had been renovated a bit, it was very much the same as he'd remembered. This year aparently has an unusually low number of priests-to-be - only FIVE. In 1966 or so, my friend had said there were about 55 or so to be ordained.

That particular seminary is also called Dunwoodie. IT's particularly known for its scripture studies. [Or was back in the day my friend attended.]
Karen

Well, at least she shaved for the Holy Father.

I, too, thought this particular piece was unsuitable and badly sung - the words left a lot to be desired, too (the English words certainly weren't the 'Hail Mary'!) I hope they weren't the original words Schubert used to address his mistress! It could have spoilt an otherwise wonderful event - but it didn't.

I rather liked the Litany of the Saints, though I was a bit puzzled that the three invocations to the Holy Trinity had the response 'pray for us', rather than 'have mercy on us'. Not sure who they thought the Trinity would pray to, but the sincerity and faith of these young people more than made up for what was probably an innocent oversight on the part of the composer.

Apart from the music of the Mass in Washington, I've been very impressed with the everything to do with the Holy Father's visit.

I missed it, but when I heard that gal sang, I shuddered.

Fr.,
"American Idol" is the US equivalent of a show called "Britain's Got Talent", a TV talent show wherein the winner is awarded a record contract.
I hate it, but it's wildly popular.

I just looked it up on You Tube.

SHE DID use Schubert's original words, the ones about the Lady of the Lake.

The look on the Pope's face when she hits the third word and he realizes what she's "singing" was priceless.

Bigger than the limbo music at the DC Mass...

Fr. Ray get with the program please. This style of "singing" is all the rage now. Being tuneful is not really in vogue. I was particularly impressed with the nasal work before the Ave "nuuuagh Ave ...."

Joking apart, I thought she was a decent enough singer, it is just that the world takes these talents and warps them into the most ugly distortions it can get away with. It then pumps up human pride and before you know it you have a prima donna "insisting" on inflicting aural torture on the innocent.