50th Anniversary of the Death of Pius XII 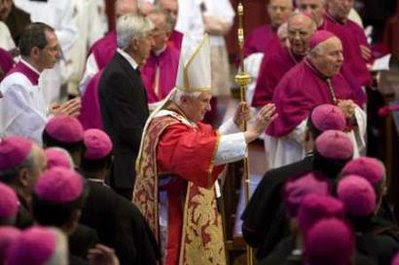 Pope Benedict celebrate Mass on the anniversary of the "Angelic Pastor", in his homily he said,

“The war highlighted the love he felt for his ‘beloved Rome’, love expressed in the great charitable work he undertook on behalf of the persecuted without distinction of religion, ethnicity, nationality or political leanings. When, once the city was occupied, he was repeatedly advised to leave the Vatican to save himself, his answer was resolutely always the same: "I will not leave Rome and my post, even at the cost of my life” (cf Summarium, p.186)”.
“How can we forget his radio message of Christmas 1942?” said the Pope. “In a voice stirred by emotion he deplored the situation of “hundreds of thousands of people who through no fault of their own, sometimes only because of their nationality or race, are bound for death or who slowly waste away (AAS, XXXV, 1943, p. 23), a clear reference to the deportation and extermination of the Jews. He often acted secretly and in silence because, given the actual situation of that complex historical moment, he saw that this was the only way to avoid the worse and save as many Jews as possible. At the end of the war and at the time of his death because of his many actions he received many and unanimous expressions of gratitude from the highest authorities of the Jewish world, people like Israel’s Foreign Minister Golda Meir who wrote: “During the ten years of Nazi terror, when our people went through the horrors of martyrdom, the Pope raised his voice to condemn the persecutors and commiserate with their victims,” ending by movingly saying “We mourn a great servant of peace.” Asian News

Thank you Father for posting this very interesting documentary. I had never seen this before, and it was a fascinating-- especially the color section towards the end.

Many thank to Fr. Ray for this commemoration of the servant of God, Eugenio Pacelli, Pius XII.

Thank you, Pope Pius XII has always been a particular favorite of mine