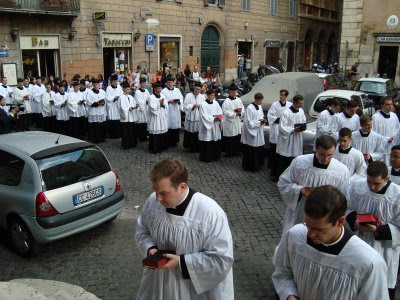 The FSSP have been holding their 2oth Anniversary celebrations in Rome, John Sonnem has been putting up some rather spectacular photographs. The Fraternity have started to put up pictures on the Italian version of their site. There is one picture of Vespers there, I can't download it, it is a picture of three young men kneeling in prayer, rapt in devotion. 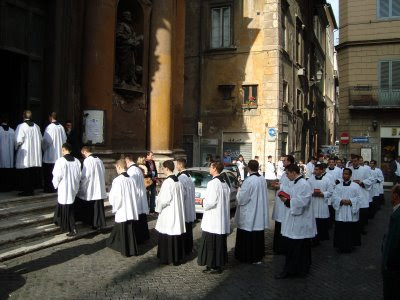 Lately I have become preoccupied with how to communicate the hope that should be at the heart of being a Christian. The great throng of young men in the processions is a sign of the way in which the Extraordinary Form and the spirituality that accompanies it calls the young especially not only to embrace the Gospel but also the priesthood.

Is there something lacking in what we do with young people?
Compare and contrast these pictures with this.
at October 23, 2008

Brings hope for us all...real men.

That stuff from the bishops conference is unspeakably naff.

I don't think you have much to worry about. The website you linked to was singularly ugly in design and content.

Why don't they just be done with it and worship mother Gaia?

O.K. As Fr. Ray suggested, I've compared and contrasted the photos of the FSSP in Rome with the "Youth" website.

What is lacking in the latter is the Catholic devotion which is evident in the former.

The former is inspiring. The latter is, well, uninspiring.

Because Lord knows there are only two options in the world: you either are FSSP and holier than thou (on the basis of your external actions) or you are "youth" and have no concept of traditional Catholic devotion and are, de facto, void of a spiritual life!

I think we are taking things a little too far here, my fellow brothers and sisters!