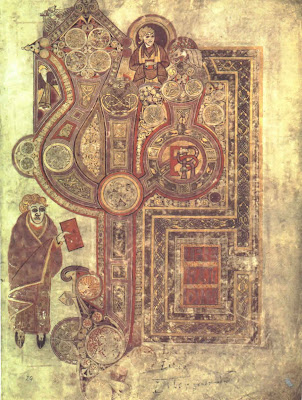 Reading the various speeches of bishops at the Synod decrying the lack of understanding of scripture, the lack of familiarity with scripture, the poverty of homiletics, the lack of integration of ecclesial life and scripture, the conflict between exegetical study and the pastoral and theological application of scripture.
5th general congregation (VIS report)
6th general congregation (VIS report)
I am left wondering quite where we have gone wrong.
Traditional Catholic spirituality was always marked by a heavy reference to scripture, the Rosary is a great scriptural meditation, allowing the central mysteries of the Gospels to bite deep into the soul. The Ignatian Spiritual Excercises, and their methodology formed men who were willing to lay down their lives for Christ and his Church and lives of total fidelity. Lectio Divina gently drew its practitioners into profound union and contemplation of the Trinity.

My memory as a child, albeit a protestant child, was that scriptural references were part of the warp and weft of our culture, people quoted scriptural phrases knowingly or unknowingly in ordinary conversation. If one goes into an ancient church that still has its decorative scheme intact there a constant references to obscure prophets, to the interpretation of Old Testament themes in the light of the New, which indicates a deep and profound knowledge of the Word of God.

What has happened?
Obviously we have become more secularised, but that is too easy an answer.
I can't help thinking that "less is more", at one time in the English speaking world, the only translations in common use were the protestant King James bible, and for Catholics, for the most part, a single translation of the Vulgate, both were sonorous, both were memorable, but the proliferation of different translations has brought confusion. With a dozen different translations of one verse, it is impossible to committ anything to memory.
For us Catholics, even in the liturgy there are a multiplication of translation, the Office and the Lectionary are at variance. Even in the Mass their is no unity in the various antiphons and prayers and the Lectionary.
Although in theory it is praiseworthy that the more texts have been introduced into the Mass and therefore people are exposed to greater amount of scripture, in practice, I think the plate is piled too high, we are forced to consume too much, and in practice receive little nourishment. Unless the priest has preached on it, who remembers the second reading ten minutes after Mass? Unless it is sung who remembers the psalm?
In theory it is good that we are exposed to all four Gospels, but again in practice, the result is confusion.

I find it interesting that according to the Missal, Mass is supposed to begin with the Entrance Antiphon, a hymn maybe substituted, but as our bishops have never supplied musical settings of these, most parishes opt for a hymn, the same with the Communion Antiphon, as for the Offertory Antiphon this isn't even in the Missal. These little gobbets of scripture set the theme of the Mass and are meant to be a meditation to mull over during the action of the Mass, and for us to take away.

I am not suggesting we return to the Tridentine Lectionary, but I do think we need to simplify and harmonise what we have, I would like to see the Synod fathers look at the value of our three year Lectionary, of the use of three readings at Sunday Mass.
We need to ask what the purpose of scripture is in the Liturgy, in the Divine Office the psalms are actually worship, in the traditional celebration 0f High Mass the proclamation of Gospel, wasn't primarily about teaching, or edification, it was about revelation.
We need to ask what is the purpose of preaching.
at October 10, 2008

"And Philip running thither, heard him reading the prophet Isaias. And he said: Thinkest thou that thou understandest what thou readest?

For once, Father, I dissent quite a bit, but respectfully. I don't think you can blame the ignorance of Scripture on the variety of translations or on the lack of uniformity within the lectionary, missals, etc.

The variety of translations is a blessing in itself, for those who understand the reason there are so many. The various translations offer us different way to see what God wants to say to our very hearts, know some translators have obviously done better than others.
I don't think this variety has anything to do with a person's motivation to be in love with God and His Word. Thus, I'm not sure if you argument hits the very depths of the problem. I think the problem in the Catholic tradition is that a good Catholic has a lot going on and is not able to absorb as much Scripture they would like; I do not mean a lot going on in the Mass. But, just in general! You have this devotion, that devotion, so on and so forth, that you do not get around to spending quality time with Scripture. Not that any of these devotions are bad, but somedays I have to recollect and realize when I am spending too much time with devotional prayer, or the like, that I don't get time with God's Word.

I think the greatest inspiration to be in love with Scripture is finding out how Rabbi Cohen (the Rabbi that spoke at the Synod) knew the entire Torah, by heart, at age eight! That is phenomenal! I also remembering reading in a monastic history course (can't remember which monastery) about how the monks had to have the Psalter memorized (obviously), but they also had to have 2 of Paul's letters memorized, amongst some other things. I think when you keep such things in mind your heart is led to the Word even more!

I'm totally with you on this one Father...Sometimes there's so much information, that to attempt to process this all would be insane. I'm a fan of the way the lectionary is in the Tridentine/Weekday Masses 2 readings. I think 3 is bit too much.

I believe the Offeratory ampithon should be located in the Graduale, (wouldn't it be nice if it was located in the Missal as it should be)...I often wonder why there's so much missing.

The fact that there is no continuity between the Translation used in the Lectionary, Divine Office and the Catechism often confounds me as a teacher. (I use the RSV-2CE and Latin Vulgate)...I think life would be easier if we went back to one translation for the purposes of making life a bit easier.

I have found a resource via the NLM called the American Grauduale which has some musical settings for the Entrance Ampithons. When I find the link, I'll share it with you Father, which can be used as far as musical settings.

I absolutely agree with you that in the Traditional Mass Scripture was read as revelation. The assigned Scriptures revealed something about the Catholic Faith. The Catechism of the Council of Trent was basically tuaght in a year with the Lectionary from the Mass. Which brings up the question, what role is Scripture playing in the Mass today? If it is indeed the same role as the Traditional Mass, then this should be expound upon in the proper usage of the appropriate ampithons. If the role of Scripture is to get into the meaning of Scripture for the individual congregation, there should be better preparation on Scriptural Exegesis.

I totally agree with what you say about the consequences arising out of the proliferation of different translations.

I don't know about the UK, but here in the States, the Roman Church's English lectionary is based on the New American Bible, which is just short of a paraphrase, and which, it must be said, is far less than memorable. (One prominent Eastern Orthodox priest describes it as "chatty".)

I wish, therefore, that the Roman bishops here would authorize the use of the RSV for Mass. Ignatius Press publishes an RSV lectionary, apparently approved for use in Fiji.

Or they could just return to using the Douay-Rheims, its language makes so much more of an impact and is more memorable imo.

It sounds more like something God would actually say.

I must beg slightly to disagree with Fr. Ray.

I do not believe the issue is really the structure of respective pericope cycles but the paucity of the translation used. I agree with frgregacca that a better version of Scripture would make it more memorable. I always recall "And, behold, the veil in the Temple was rent in twain from the top to the bottom; and the earth did quake, and the rocks rent" (Mt 27:51) from the Authorised Version. In contrast once I was at Westminster Abbey for Evensong and a pericope included the very worst phrasing I have ever heard "When Jesus was arrested by policemen.." I was quite appalled and had to walk out.

Singing hymns, often of mediocre composition, in place of Scriptural texts irritates me too.

Decent versions of Scripture sung where it should be seems to be what is needed. Why not be radical and use what is in the Graduale?

I think you have hit on something here, Father.

On the additional readings today. You can't force-feed people. But a small taste can light a flame and whet the appetite for more.

I have the same feeling about The Catechism of the Catholic Church. Too much information! People criticize the old catechisms and rote learning, but they were simple, direct, and conveyed the basic truths in an easy-to-remember format. They were basic, something to build upon, and not the 'whole story' but a sound starting point.

On translations and the familiarity of the old. Imagine someone trying to 'translate' Shakespeare into modern English! It would be a disaster and the beauty of the original would be lost. It would be "Sans teeth, sans eyes, sans taste, sans everything..."

As promised Father, here is the link from the NLM: http://www.newliturgicalmovement.org/2008/10/american-gradual-free-download.html

It goes from Advent to Baptism of the Lord, which is a great place to start change for music liturgically, since it's the "beginning of the Liturgical year"

I my opinion one of the biggest reasons that Catholics are unfamiliar with the Scriptures are the poor homilys preached on Sunday. How many priests actually unpack the scriptures and apply them to our everyday lives? How many priests just churn out another 'God Lurves you come as you are' homily Sunday after Sunday?